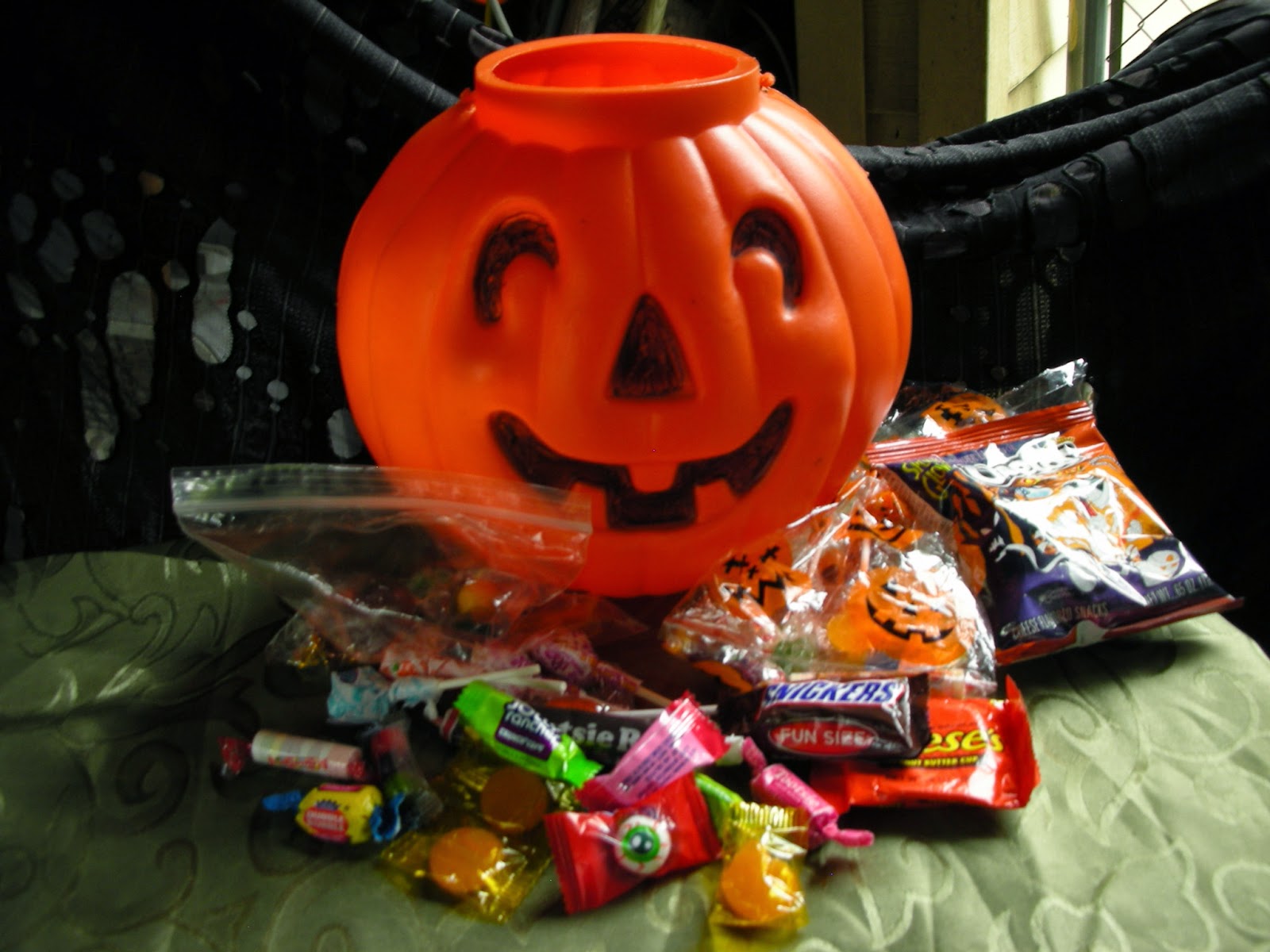 The time is flying by, I can't believe Halloween is already over for another year. This wasn't a bad one, though it was surprising that for such a nice clear Friday night we only got four trick or treaters.

I sat on the front porch, covered by my bicycle rain cape, wearing a grinning red skull mask and witch hat. When people approached the porch they thought I was another decoration. I didn't scare any kids, but one dad got spooked.

Some of my friends decided to go trick or treating, so I joined them. What did I get in my pail? 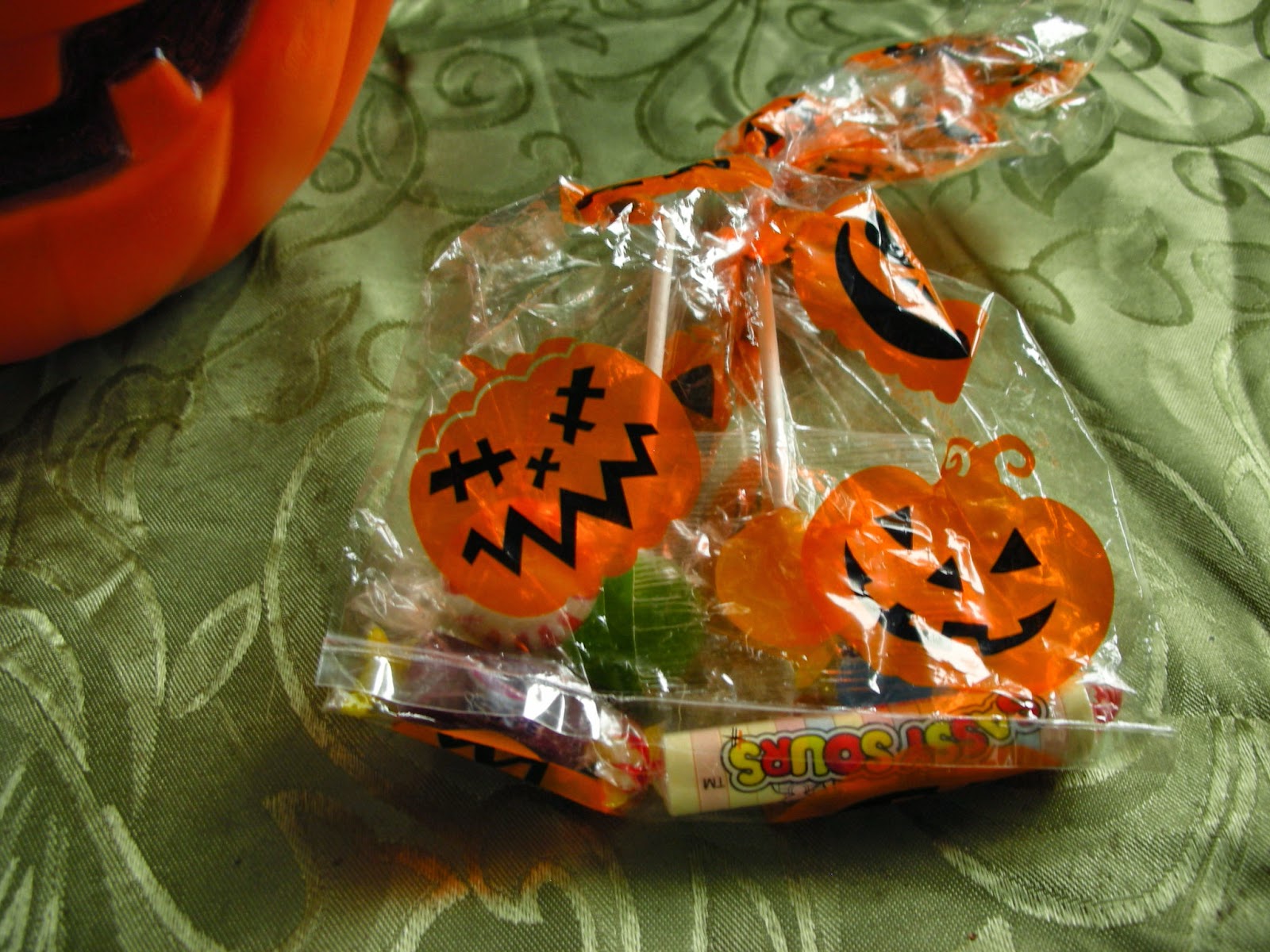 First up is the last stop of the evening, "Reverend Smiley's" house beside the church at the end of our street. Two kids were giving out treat bags there, which was ironic. Kids giving candy to adult trick or treaters? 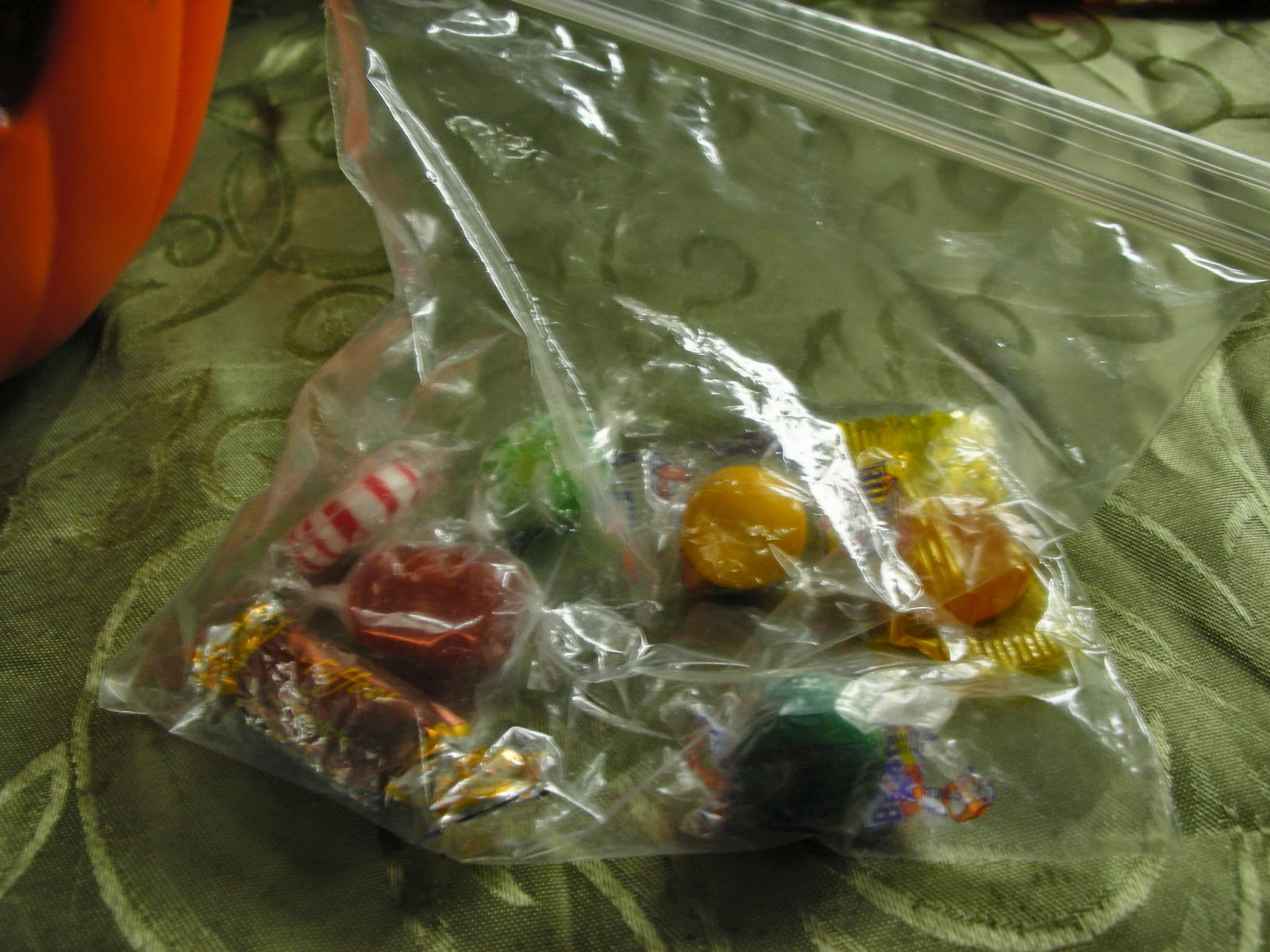 Another house giving out hard candy treat bags. This guy looked and sounded like The Cowboy from the Big Lebowski, and he said "Take her easy" when we departed his porch. 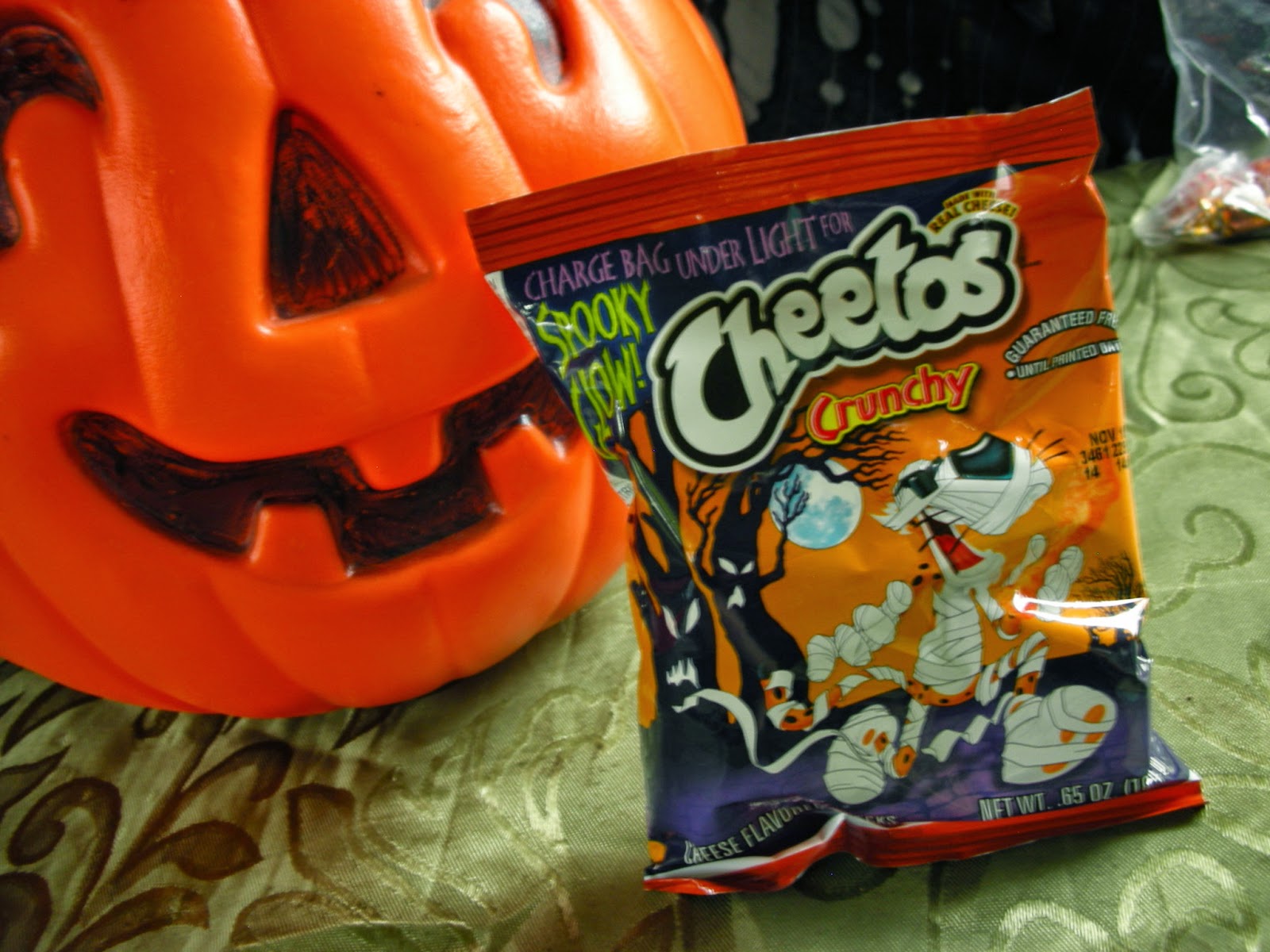 This was at "Cat Guy's" house. Cat guy lives around the corner from us, he and his wife keep a lot of cats, and he likes to sit out in the driveway and wave at the neighborhood going by.

Cat Guy always goes out of his way to decorate for Halloween. In fact, he was out taking down his decorations when we came by. 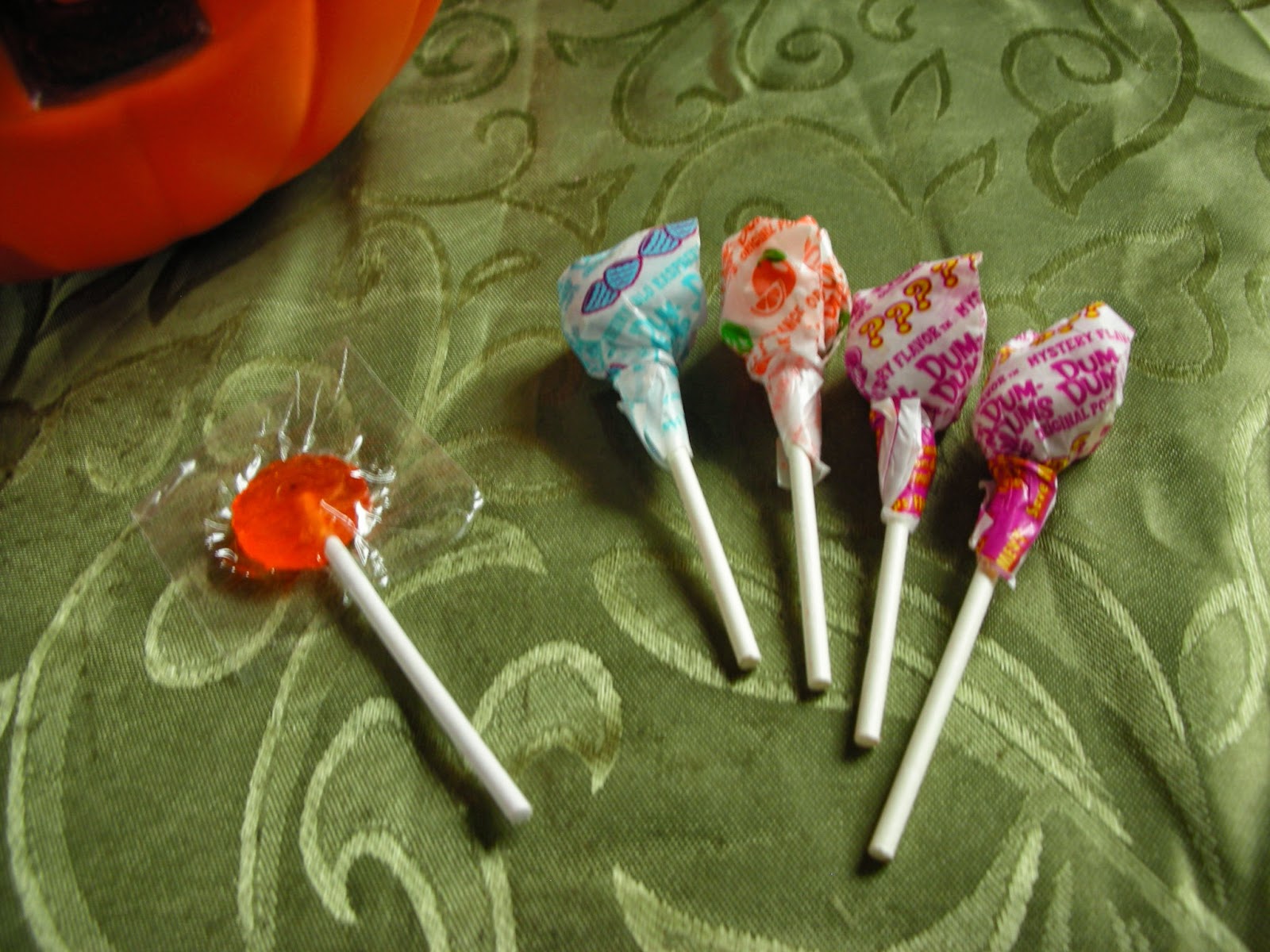 The lollipop contingent, and I am pleased to have received to many DumDum pops, which are the best. I will brook no argument in regards to Tootsie Roll Pops, DumDums are better.

When I was a kid, there was an old lady who lived at the end of our street, she liked to give us neighborhood kids candy and soda pop all the time. But on Halloween she exclusively gave away DumDum pops. The bes'. 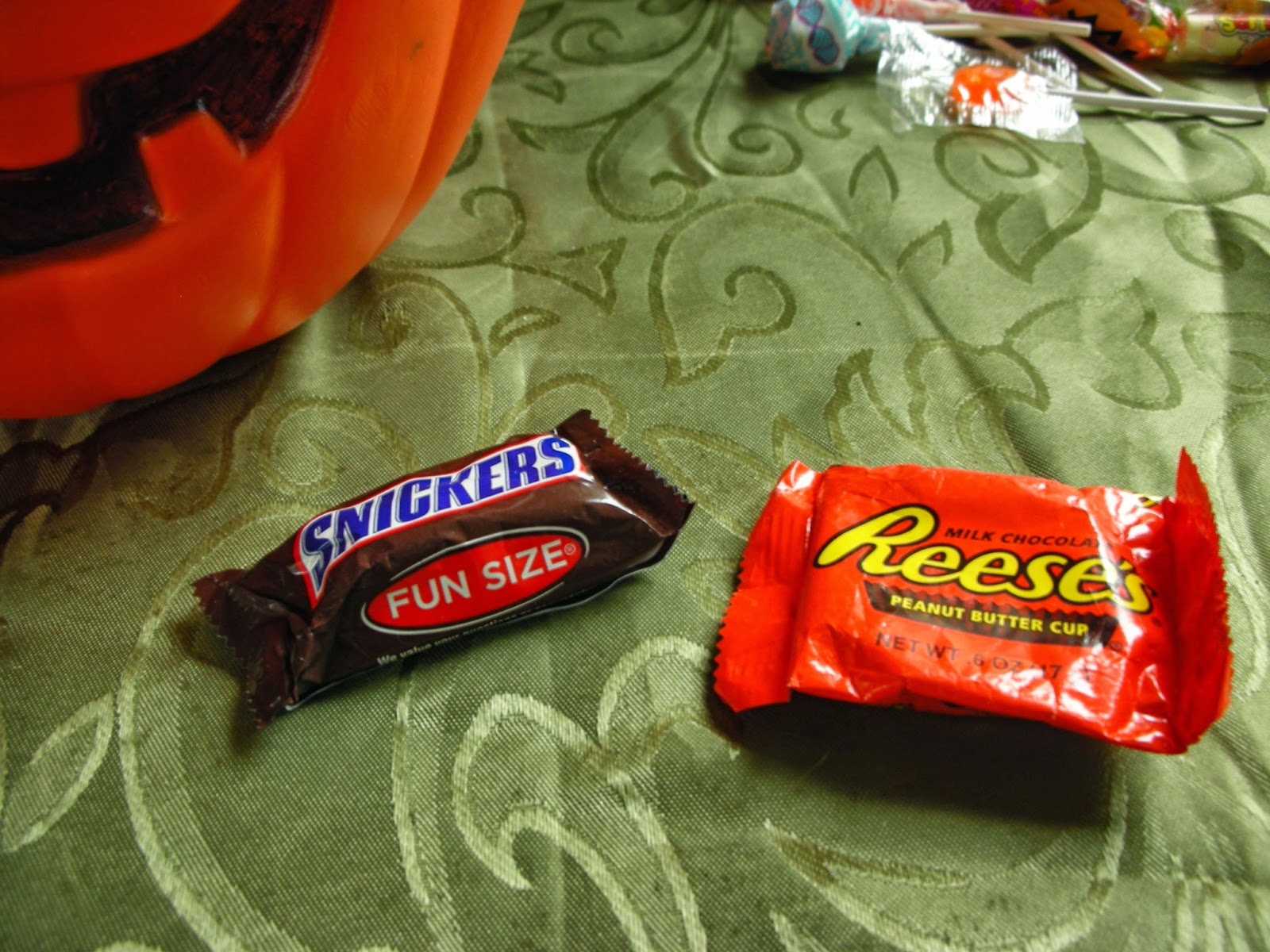 Fun size chocolate bars, always appreciated. I know that I also had a fun sized payday AND a king sized payday bar, but I think my roommates ate them before I got to explore the candy pail.

The king sized payday was all squashed, like it had been run over by a car tire, and the funny thing is that each of us got a king sized bar from this house, and ALL of them were squashed! 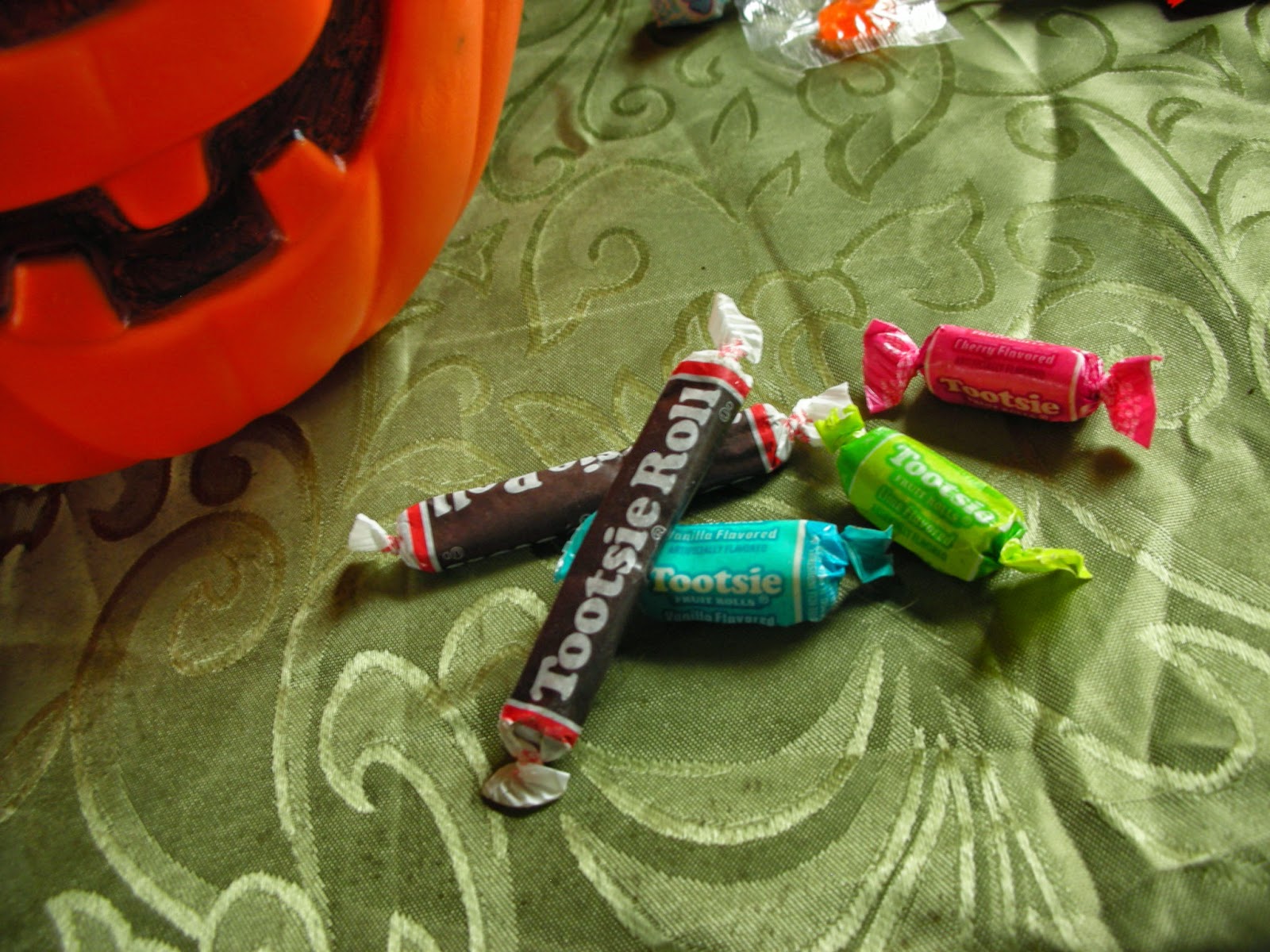 The tootsie roll contingent. I see they're coming in multiple flavors these days. 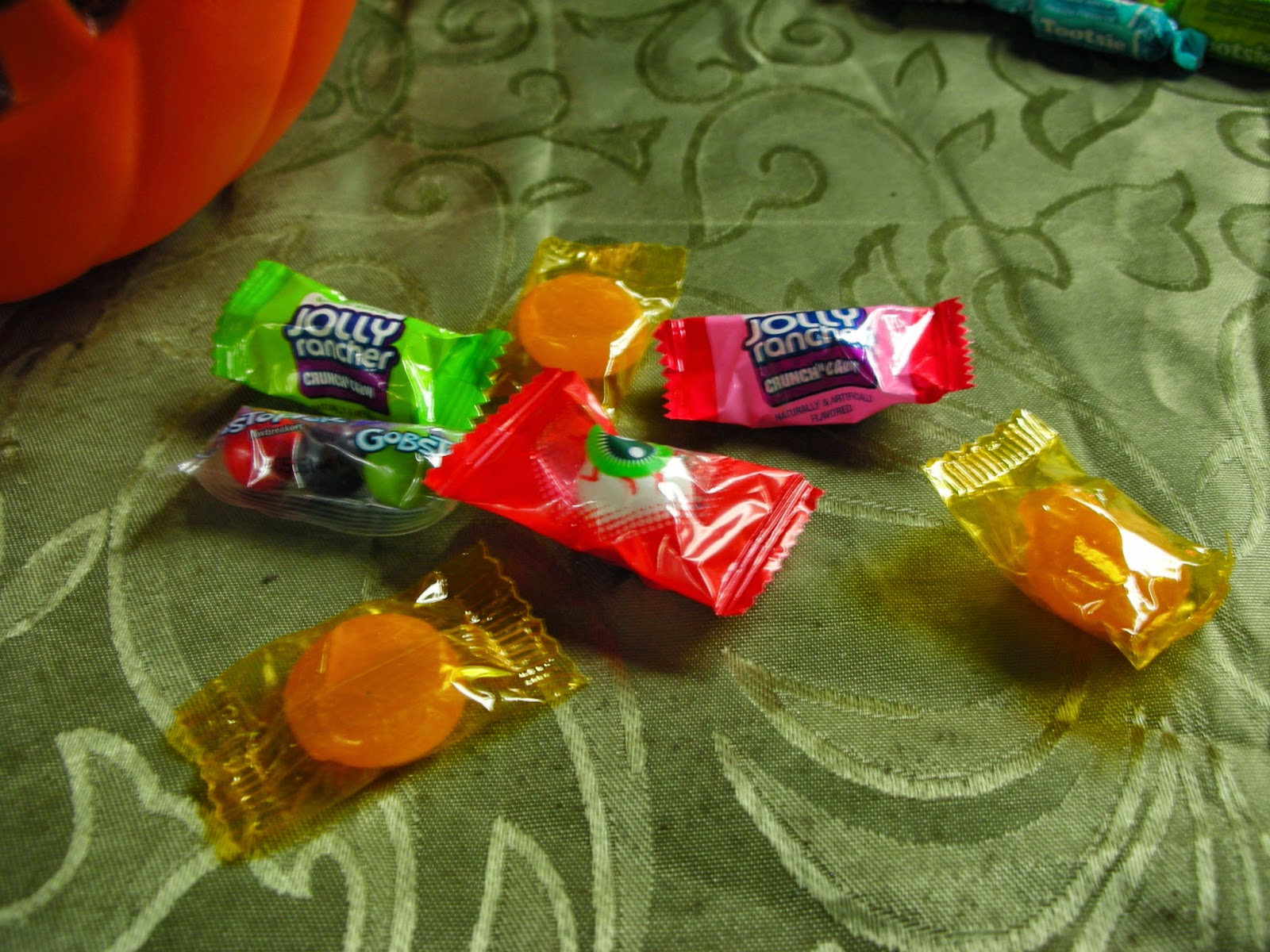 Hard candies. I notice that the jolly rangers have a weird new consistency these days. 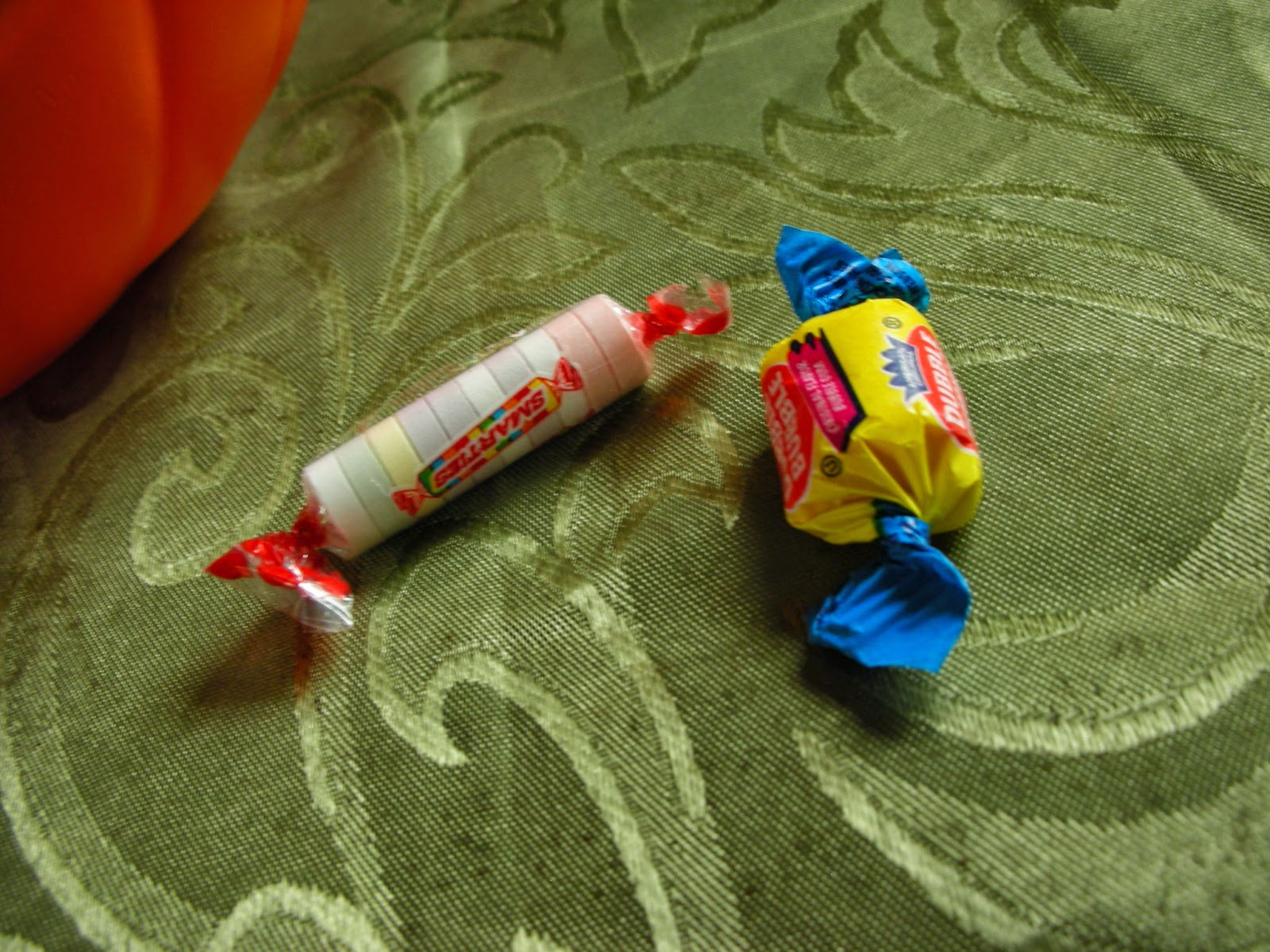 Hoo yeah, I got a BUNCH of smarties, but the roommates at them.

In the end a good year. I have some tentative plans for the coming year that I'll reveal soon, plus I'll be posting on obscure creepy winter celebrations throughout the yule season.

I hope everyone is having a great November, and that you're all soaking up that autumn goodness while it's in the air.
Posted by Mantan Calaveras at 2:34 PM 5 comments:

Here are some shots of my haunt this year. Quite simple, I left it open for my roommates to do a lot of decorating, instead of hogging it all for myself. 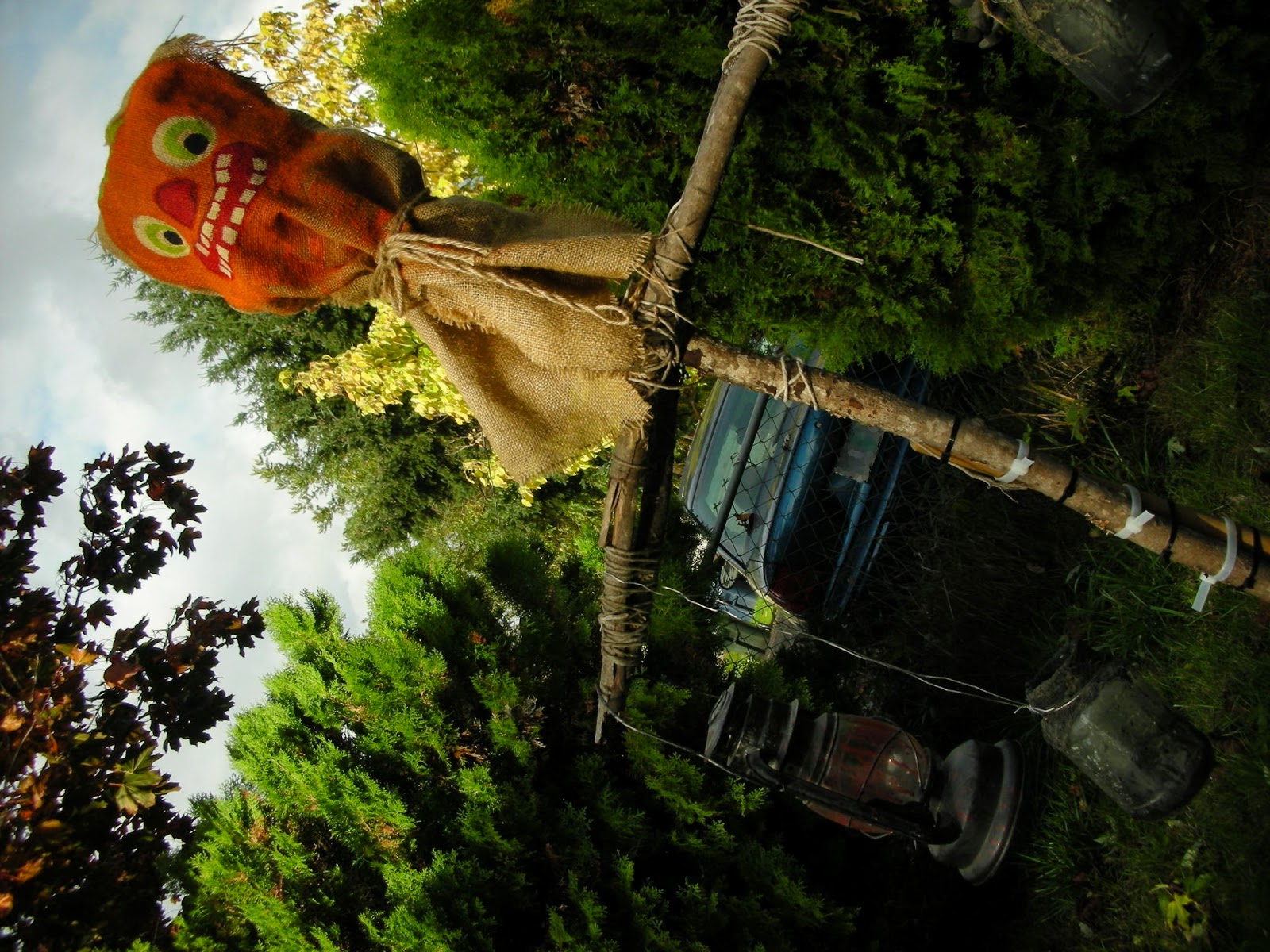 I made up this scarecrow last minute. 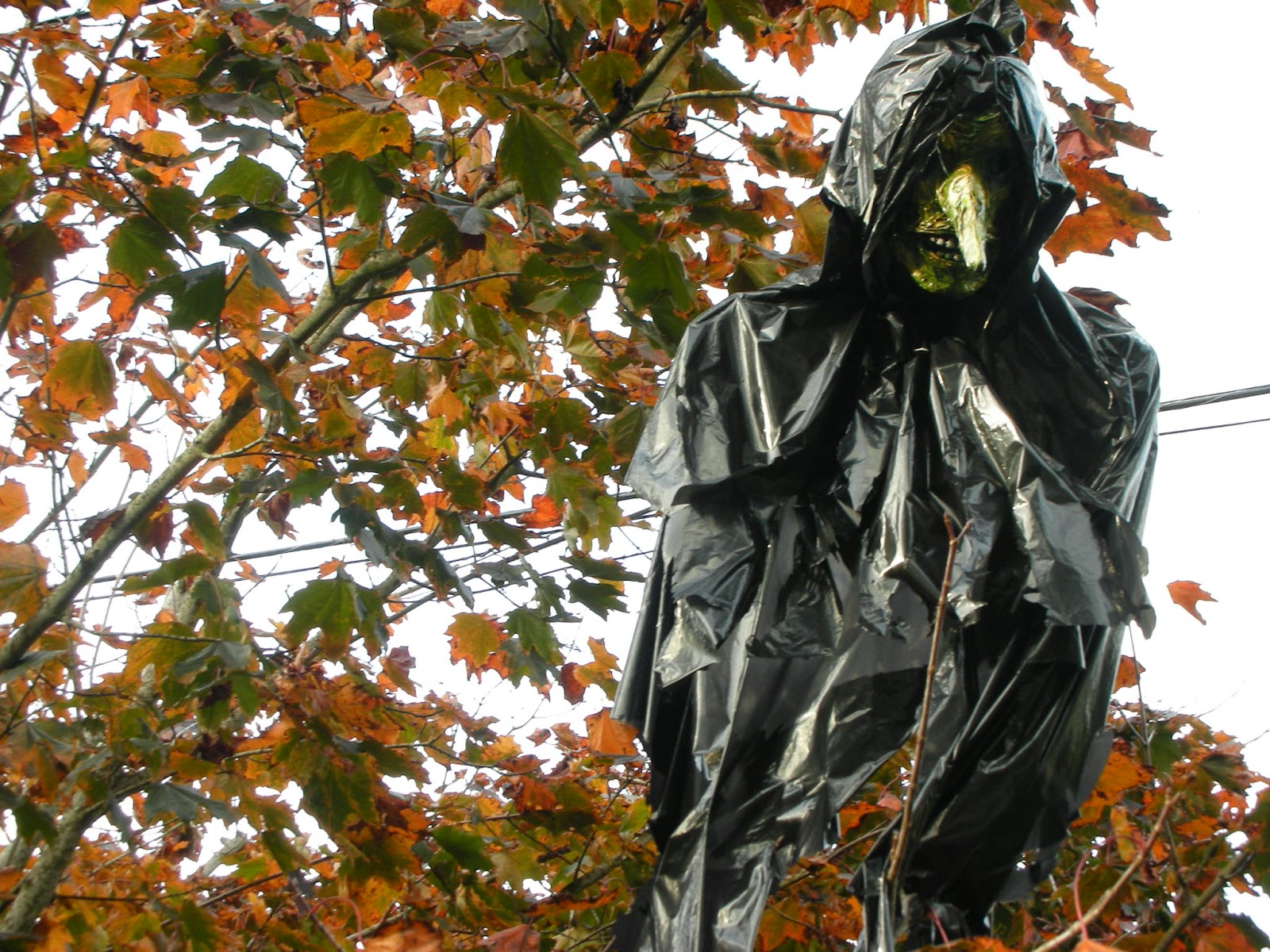 The wind witch rustling gently on the October breeze. 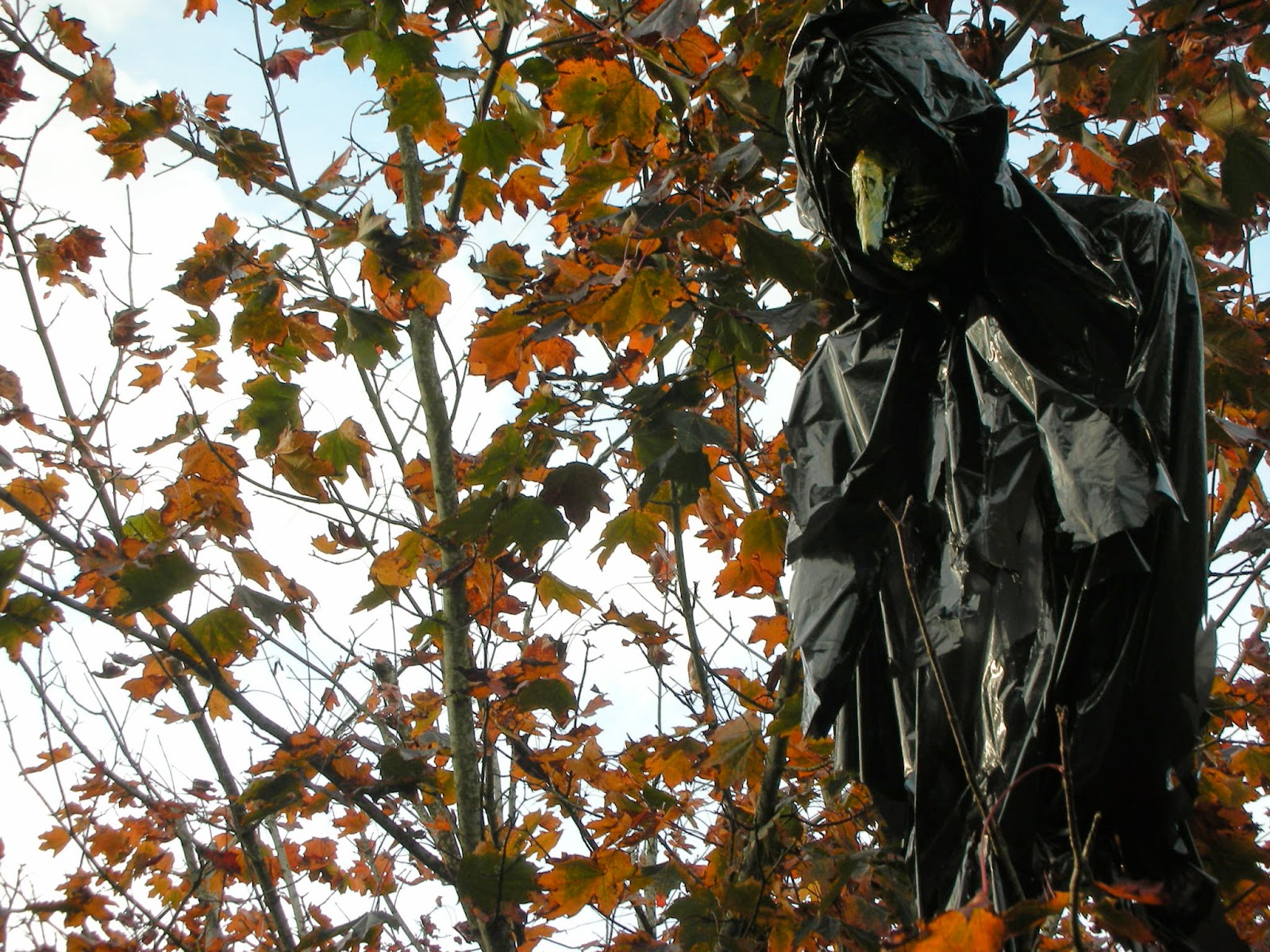 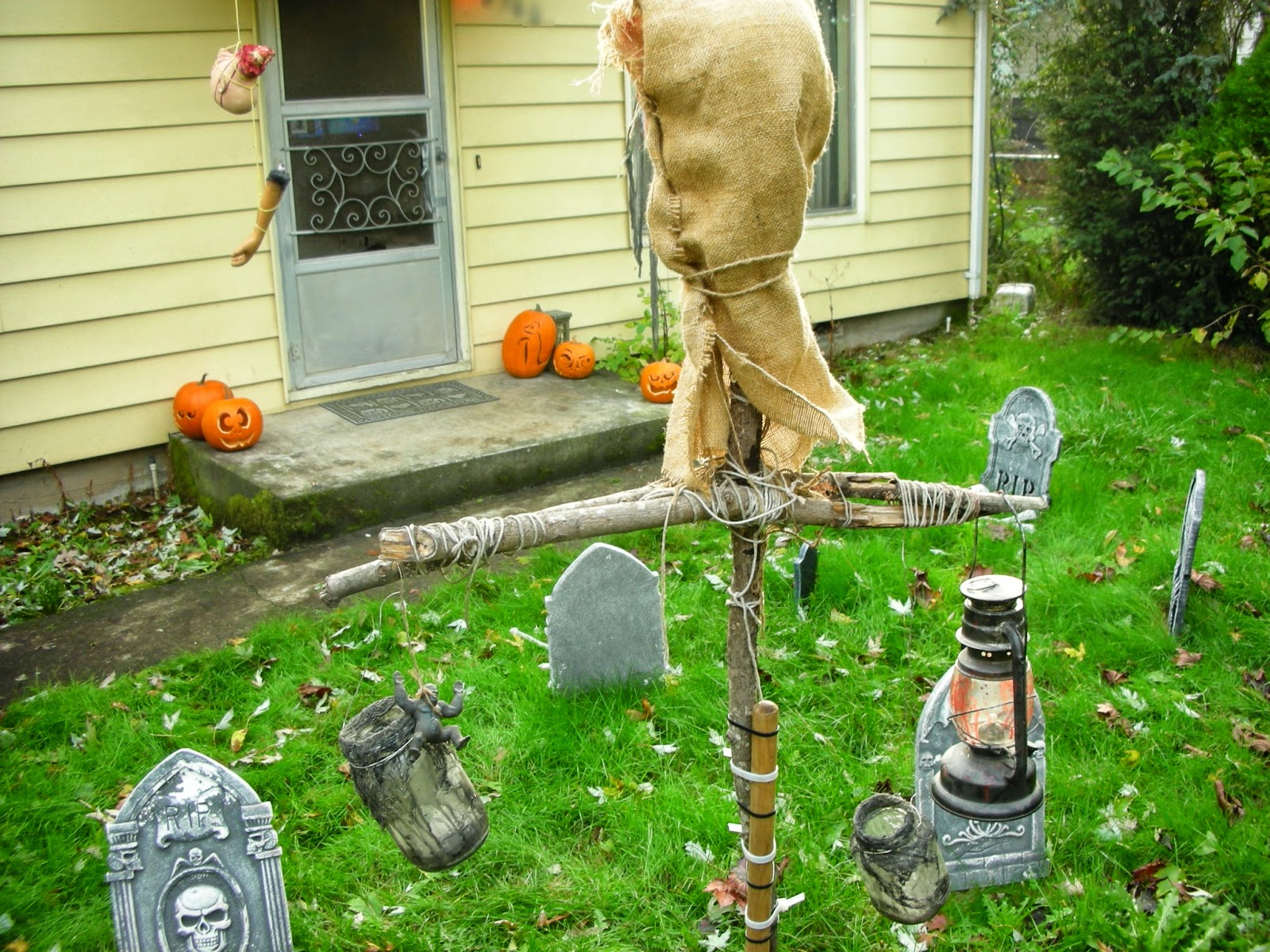 The scarecrow overlooking the little graveyard. 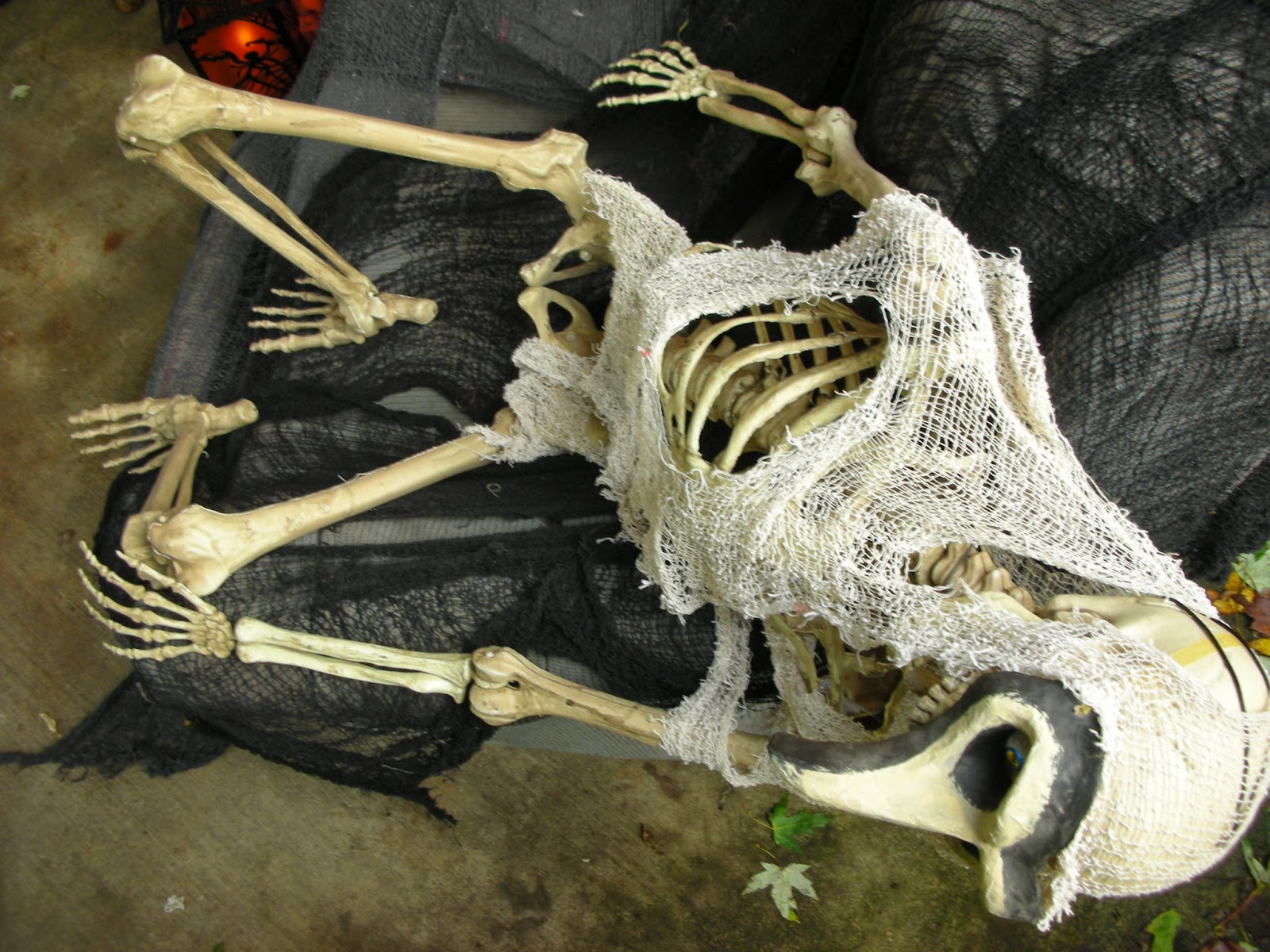 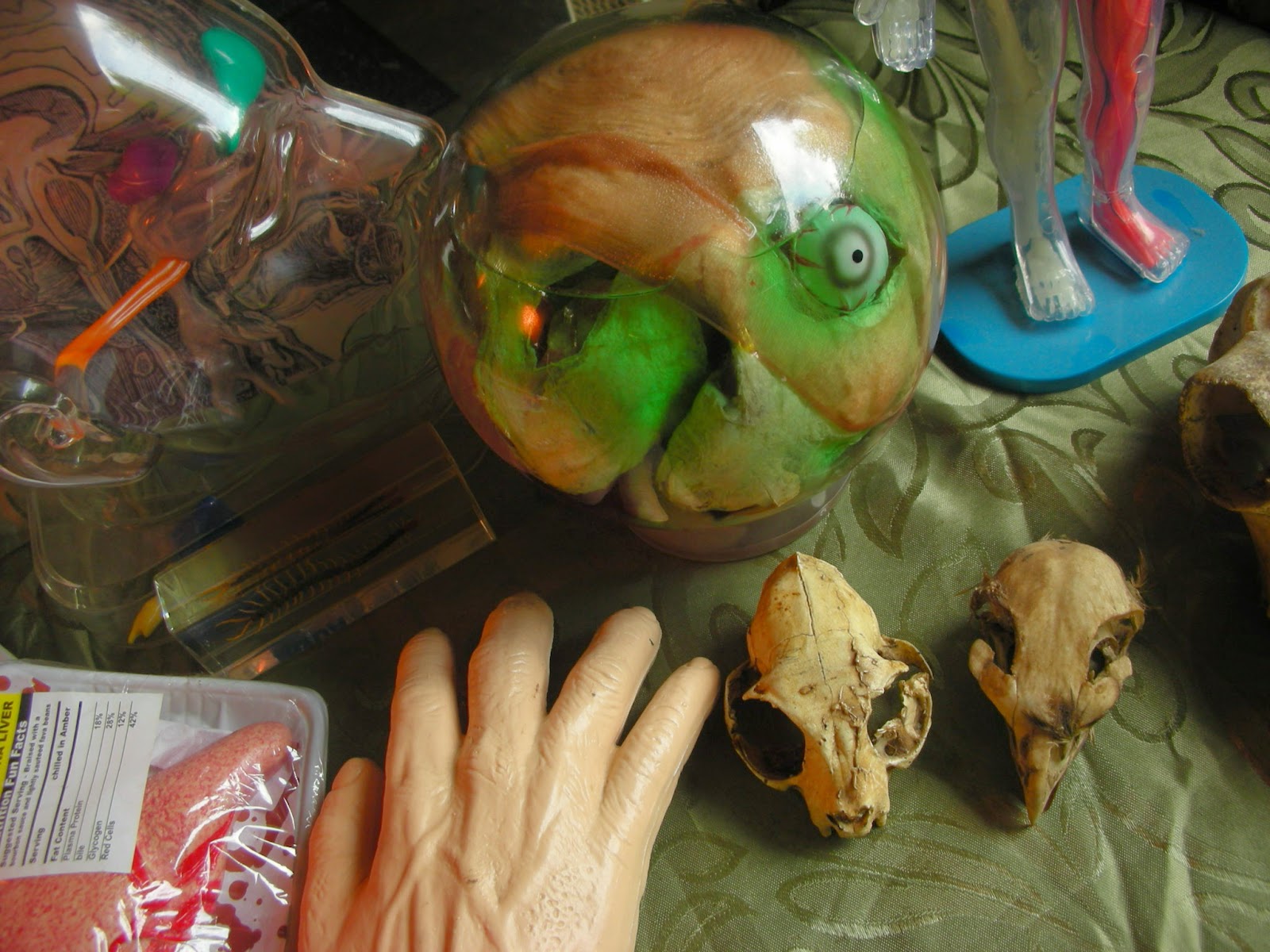 Uncle Gary made this Thing-In-A-Jar. 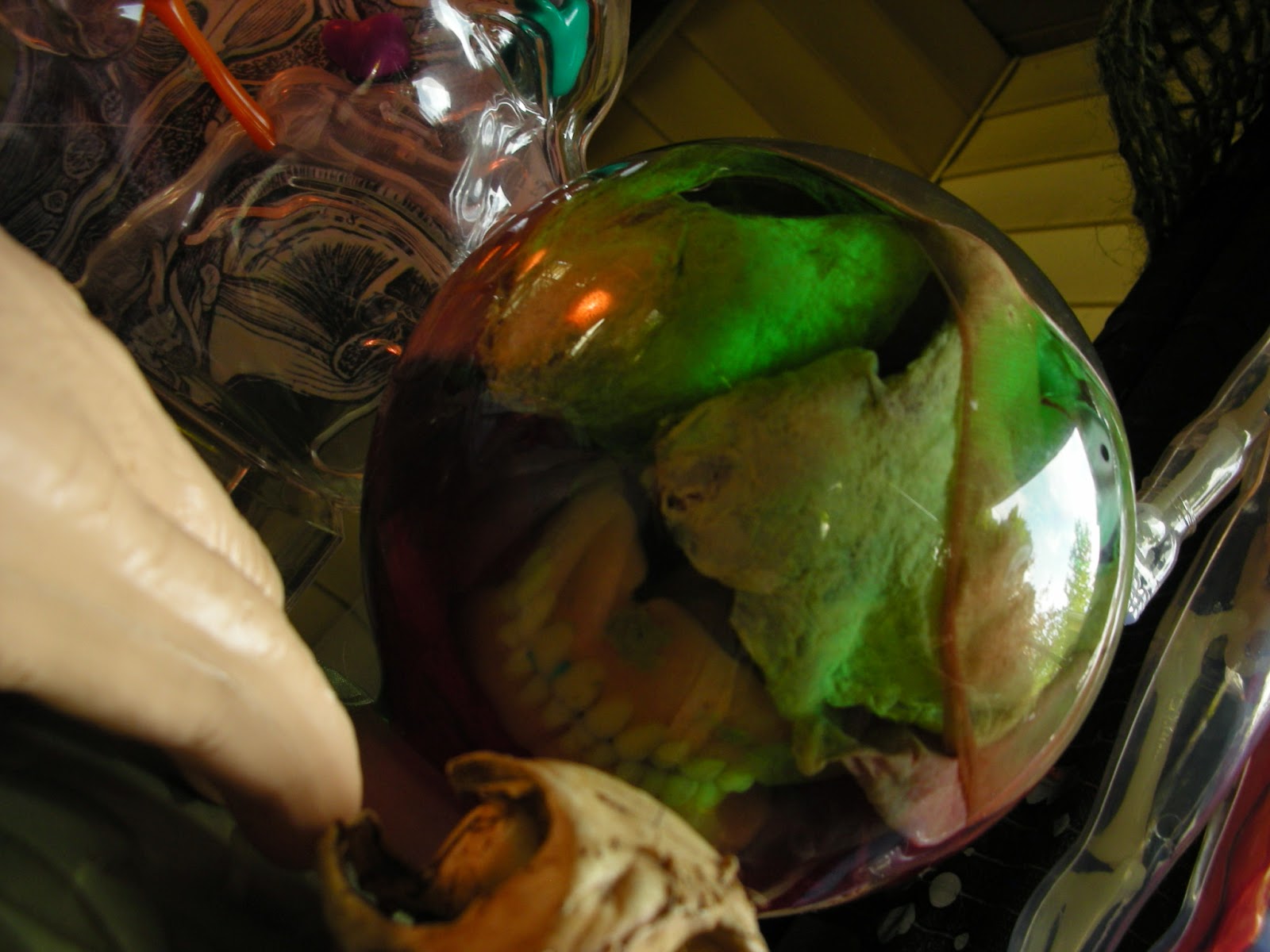 He used his old dad's dentures. 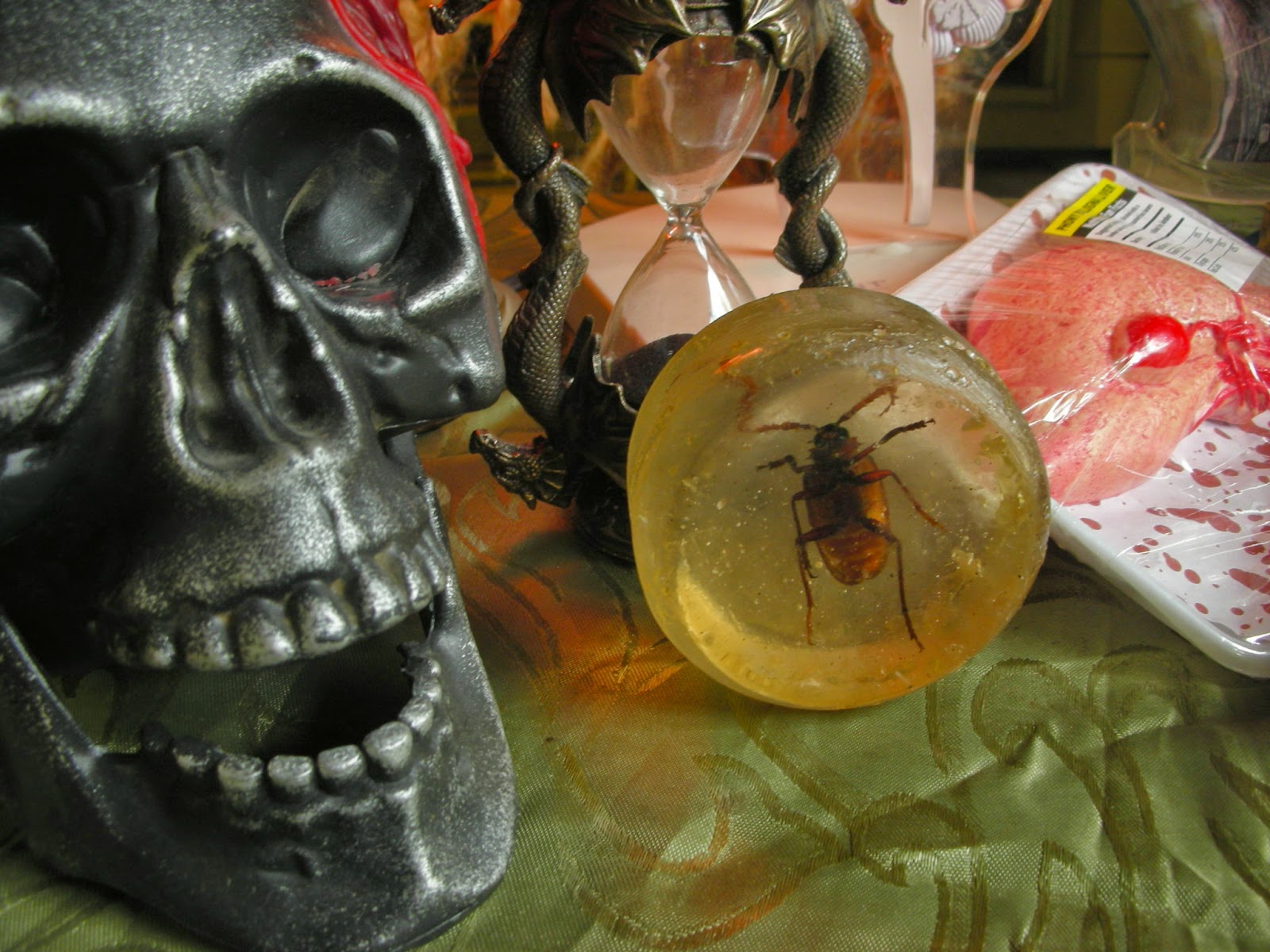 Serina provided this cockroach, and the animal skulls. 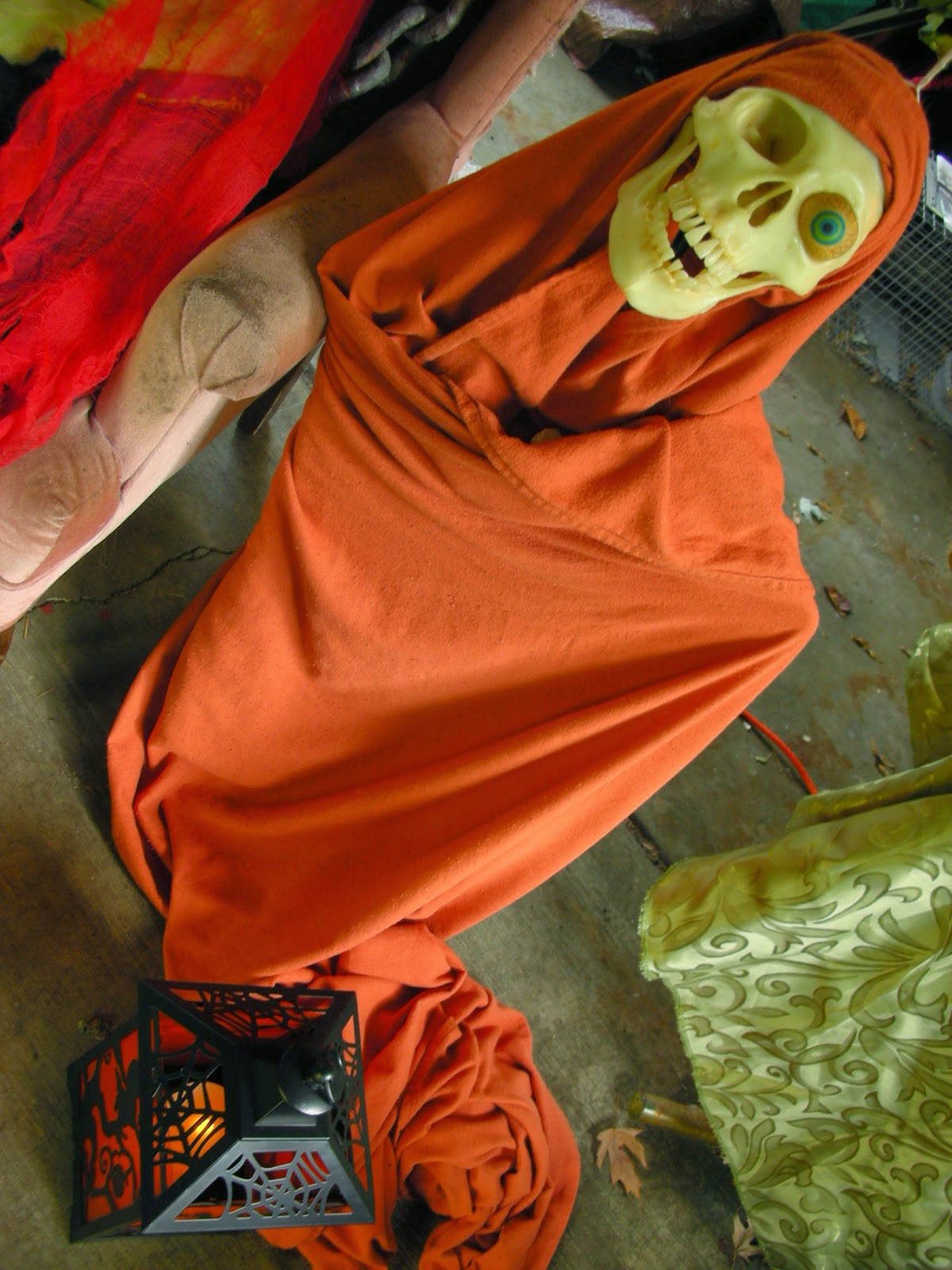 This glow-in-the-dark skull is one of my oldest surviving Halloween decorations. I got it when I was just a little tyke. I bundled it up in an orange sheet, and had it lit from below with a black light to make it glow. 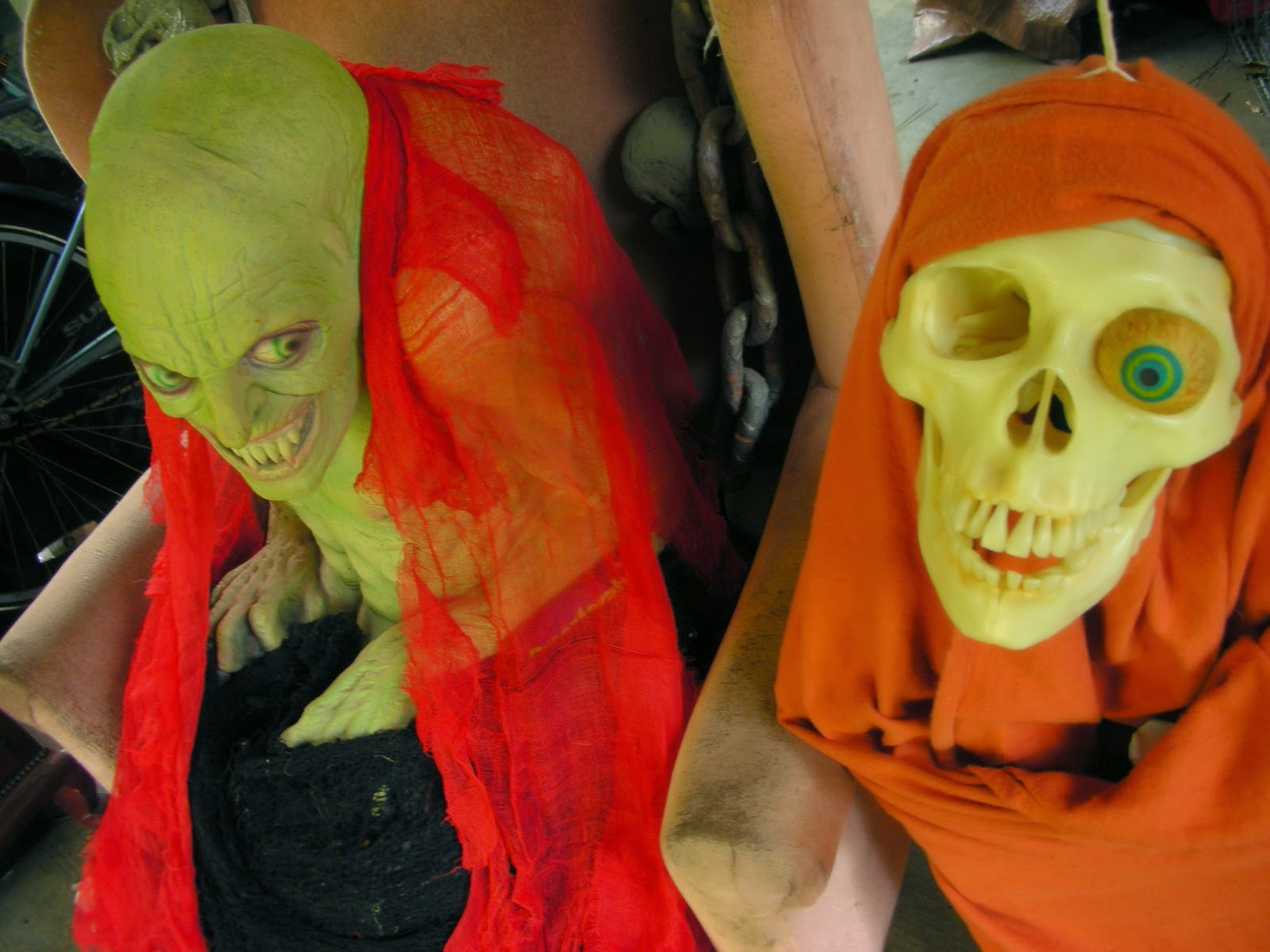 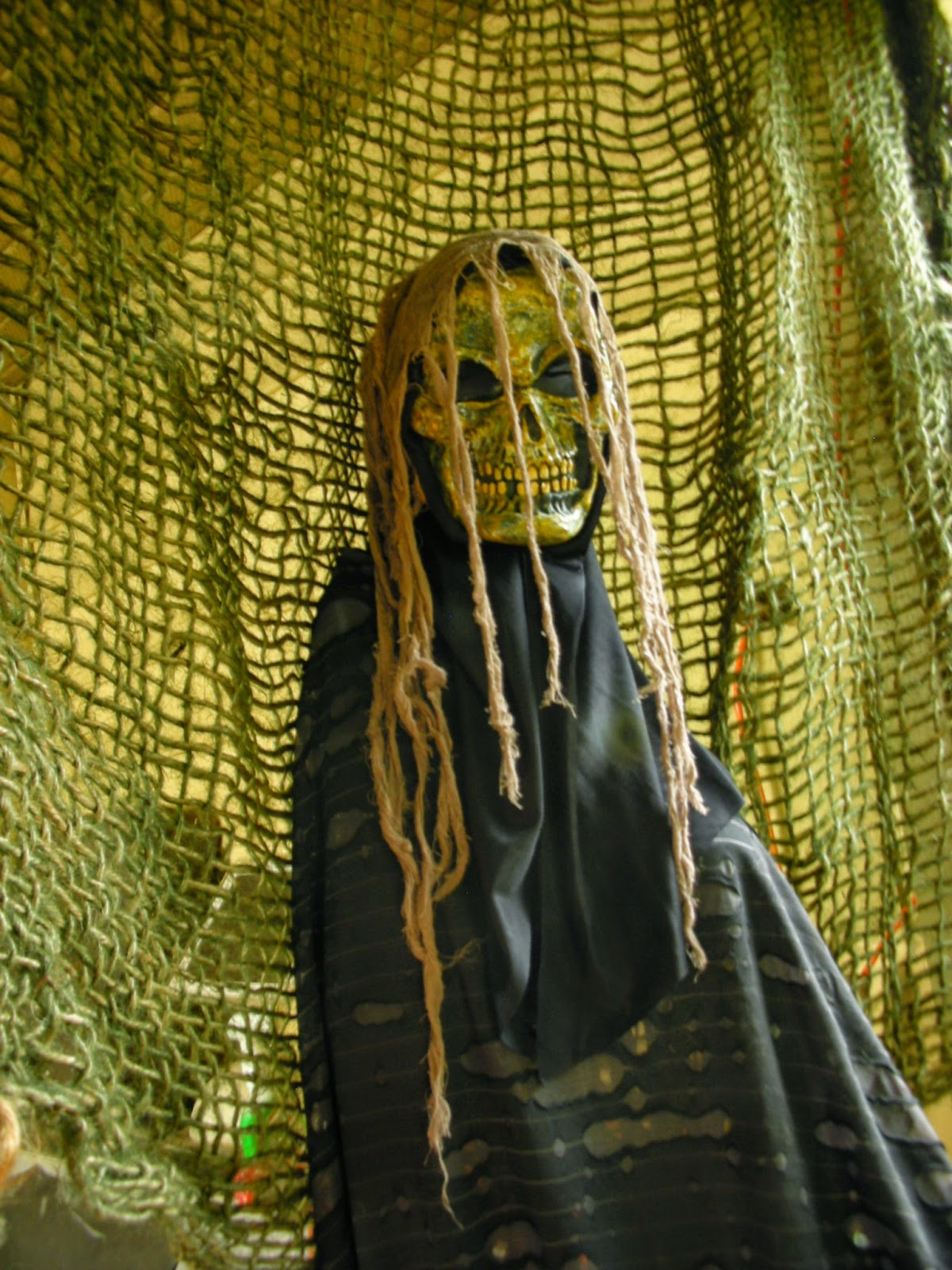 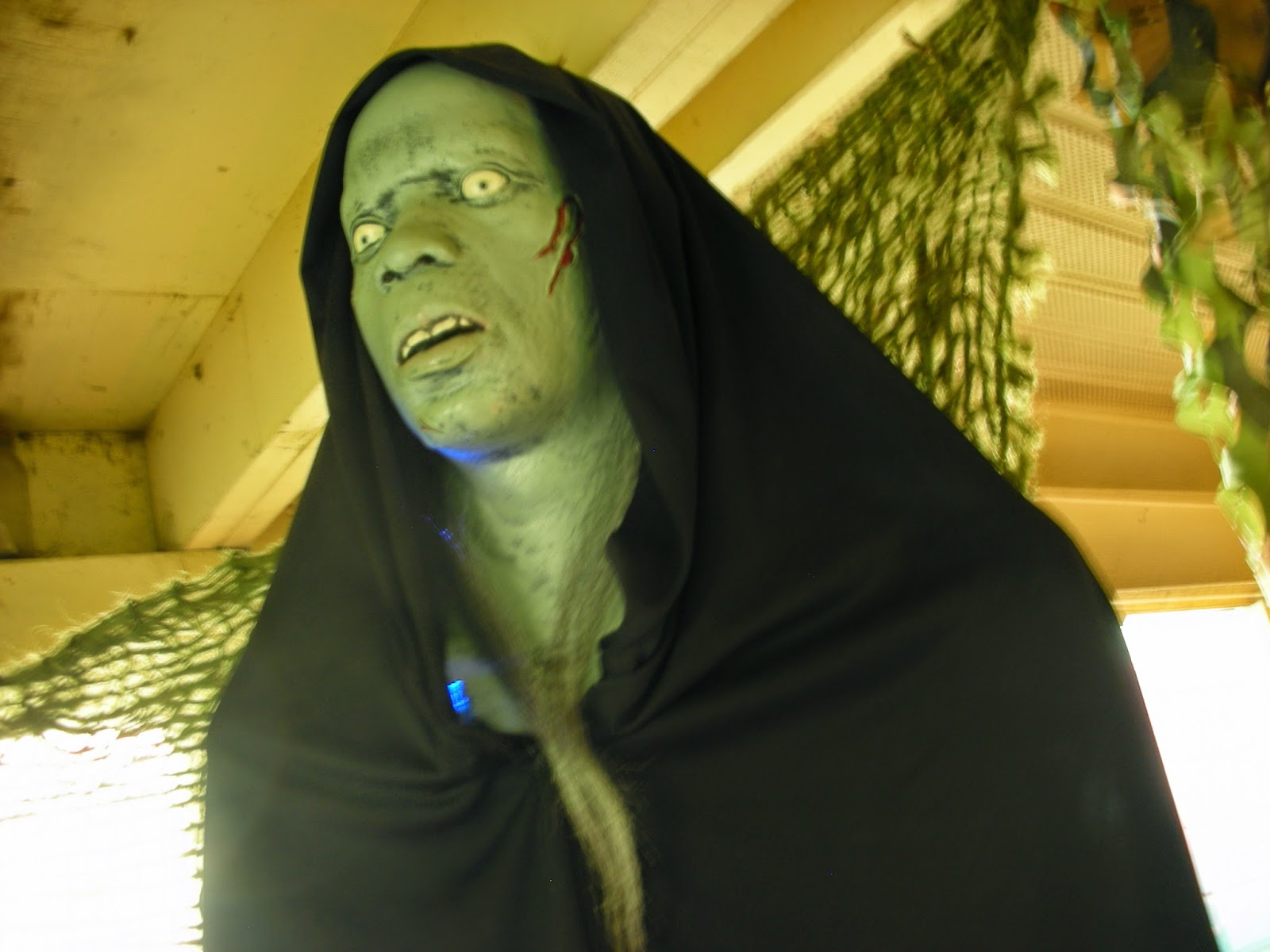 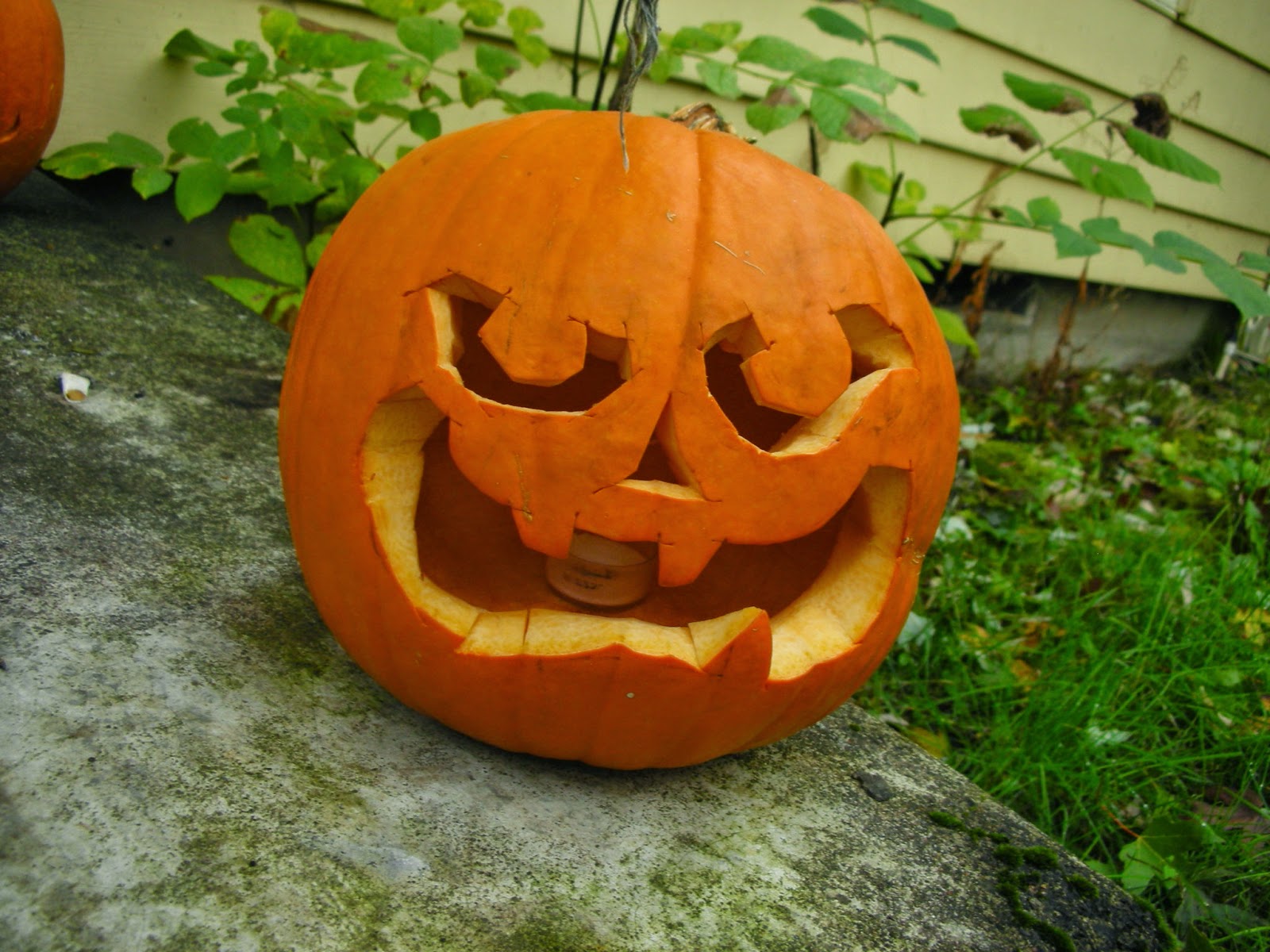 My Jack-o-Lantern for this year.

We had nice weather this year, clear and cool. Still, we only got a few trick-or-treaters, 4 to be exact. Oh well, everybody had a good time.