In just before midnight, I wanted to somewhat belatedly wish everyone a Happy Hallowe'en!

I know it's been a tough one for a lot of us this year, what with inclement weather, technical malfunctions, and medical complications.

Maybe it's just an excuse to set aside our annual Hallowe'en ambitions, and admire the night on a simpler level. As we did when we were children. When there were no grandiose plans. When Hallowe'en was a bit of relative Anarchy, and we ran free and flight-footed in the night.

Maybe, this year, it's not about Hallowe'en night, maybe this year it's about All Souls Day. Dia De Los Muertos is tomorrow. I'm going to clear up the haunt, and setup an alter, and show Ghede a little love. After all, he is the reason for the season. What are you gonna do? 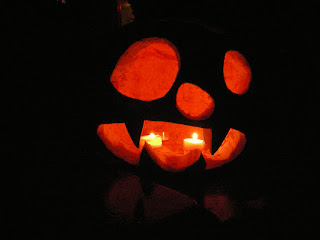 You know, I have to say, I've been deeply heartened by the decorating efforts of my neighbors this year. Eugene is usually cold and rainy in October; so most people, myself included, tend not to decorate. But this year I've noticed a remarkable number of houses draped in cobwebs and skeletons. Maybe it was the long, dry, warm indian summer we had. Usually it starts to rain around the end of August, but it was hot and clear through till the first couple of weeks of October this time. I thought I would share some of the neat houses I've seen. 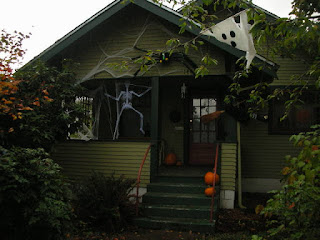 Snapped this on my way in to work. Classic! 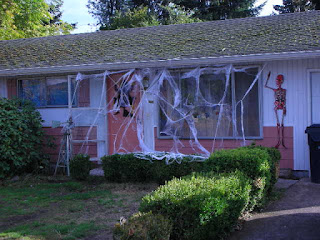 These are from an afternoon bike ride along the Willamette 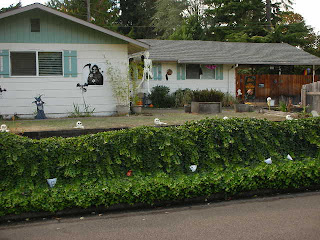 This house was pretty cool. I like my skeletons piled in perfectly equi-distant positions. That way I get optimal spookiness. 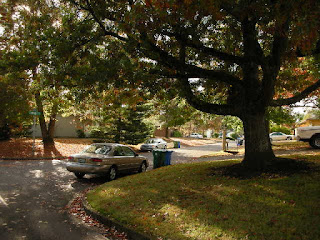 Autumnal Sploendoor. Read that in the voice of Matt Berry 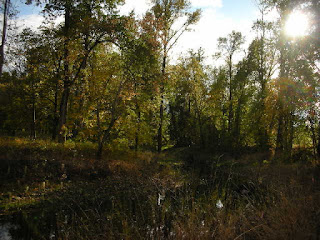 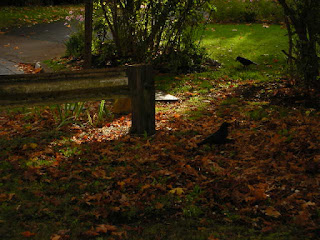 Eugene doesn't have a pigeon population. Instead we have all these black birds. They are everywhere, rooting for unspeakable morsels in the soil. 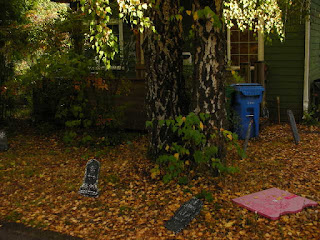 This house was cool, even though a couple of their tombstones had fallen over. Darn you rain! 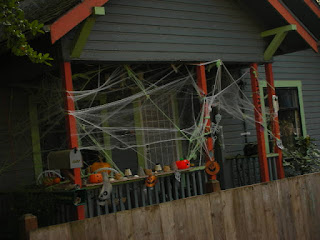 Here we are in the Whit. This house looks cool at night. They have a blue porch-light that makes everything glow. 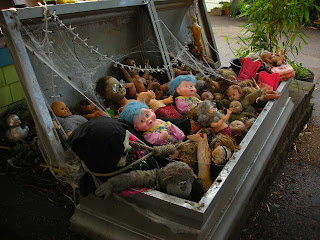 Casket full of baby dolls. Full disclosure, this isn't really a Halloween display, this house looks like this year round. As I was snapping the photo, one of the residents was getting into his car, and mentioned that they used to bury the baby dolls in the yard. 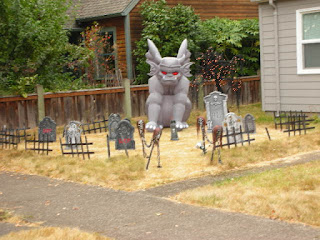 This was the first house I noticed, and probably the first yard haunt other than my own that I've ever seen in Eugene. It looks great at night, with that blue flood light going. 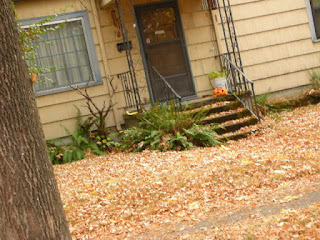 And lastly, this was the house across the street from the gargoyle graveyard. They carved their punkin' too early, and it's already started to ingratiate itself with the porch.
I hope to get more shots of the cool decorations I'm seeing on my way too and fro' downtown!
Posted by Mantan Calaveras at 8:21 PM 5 comments: 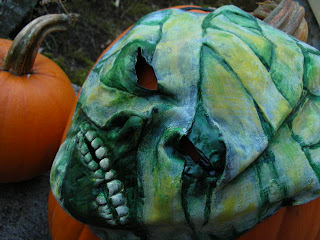 One of our pumpkins, models a penny auction mask. I got this mask cheap, for a buck, from China. Ha ha! I have a fondness for cheesey cheap stuff. It's a little flattened, and I haven't been able to mold it back into shape. I kind of like that effect though, makes it seem all more the mummified.

I did repaint it though, the original paint job was pretty flat and lackluster, just a yellowish white with some blood around the mouth.

I started the repaint by giving it a wash of black, and then layered on some brown, then cream for the bandages. Lots of green, especially to bring out the layering on the bandages, and finally a brushing of sickly yellow. I love the look of dry brushing.

I bought this mask, because it reminded me of a monster from a childhood nightmare. It was kind of a wacky nightmare, taking place in a hospital full of monsters. This mummy was confined to a hospital bed, and I couldn't be sure if it was an Egyptian mummy, or some long forlorn hospital patient.