I didn't really blog Creepmas along with everyone, though it was fun to see all of the creepy Christmassy cheer that was spread. A sort of digital wassail!

I wanted to share a bit myself, so lift up that wassailing cup and take a drop of this. 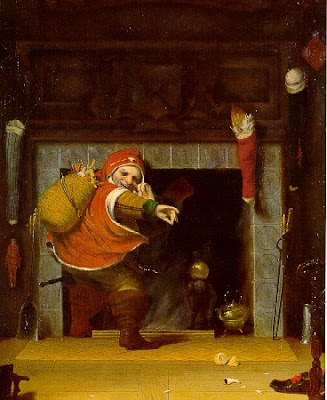 "Nicholas Was..." is a short story written (and read) by eminent author Neil Gaiman, and reflects much of how I have always felt about Santa Claus.

One year, I crept out of bed, late at night on Christmas Eve. I snuck into the dining room, which adjoined the living room, and could hear something shuffling around by the tree. No matter how hard I tried though, I couldn't bring myself to look. It wasn't fear that paralyzed me, it was something else, something deeper and more arcane. It was magic. Saint Nicholas, whoever that man may be, does not want to be seen.

I always knew this, in my bones. They always told us that the fellows at the mall were just Santa's "helpers", and they are jolly enough. The television specials always portray Santa that way, Jocular and benevolent.

But we know better. We always have. No one is that good, that beneficent. I understood that this "jolly old elf" bit was a facade. In order to travel all around the world in the span of only one night, father Christmas must command some terrible power. And no one with such power is wholly benevolent. We know this too, instinctively.

So, what is the true nature of this mysterious being? who creeps into our homes through the hearth, on the darkest and coldest night of the year, and leaves children marvelous gifts, or more menacingly, lumps of coal.

No, I always knew, instinctively, that Nicholas was a dark soul, a fellow traveler in our explorations of the regions of the macabre.

If Gaiman's "Nicholas Was" does not strictly relate the facts about Santa Claus, it does admonish us to remember the nature of father Christmas.

Merry Creepmas friends,
Posted by Mantan Calaveras at 12:10 AM 15 comments: 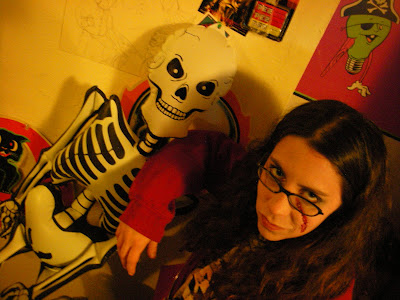 Molly Turner, our survival(?) girl
I disappeared for a bit, but why did I come back now?

We celebrated with some fancy Blackbird County champagne, leftovers from one of our penultimate scenes.

We still have some re-shoots to do, but this is a big milestone for us, and it left me recalling an icy cold Thanksgiving-Eve (at 3 am) when we finished shooting our short film "Zombie Awareness Now!" shot on DV with a budget of Zero dollars and no cents.

Next up we have editing to get into, and I will be directing the art department as we begin on the animated sequences of Blackbird Pie. 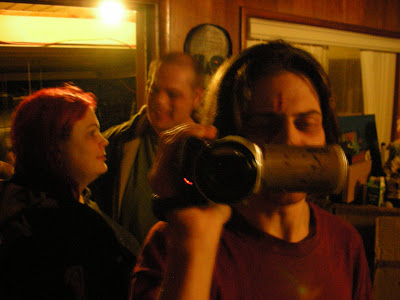 I almost forgot, to post shots of the Bog-lights. These guys were the stars of my haunt this year. I carefully considered what I wanted the theme of my haunt to be, I particularly wanted to avoid becoming derivative of other haunters like Pumpkinrot, who has been an incredible influence on me since discovering him a few years back.

In the last couple years I made quite a few witch-jars to decorate with, and I loved them as a light source, but I wanted to adapt them into something new. A monster that served as its own light-source, which led me to the idea of the bog-lights.

Will~o~the~wisps are a well known phenomena in folklore, eerie inexplicable lights seen in inhospitable locations like marshes and cemeteries. I wanted to imagine what they might look like up close, what they might actually be. I'm not entirely happy with how they came out, so I might iterate on them next year, but I am satisfied that I did get off my butt and make them in time for Hallowe'en! 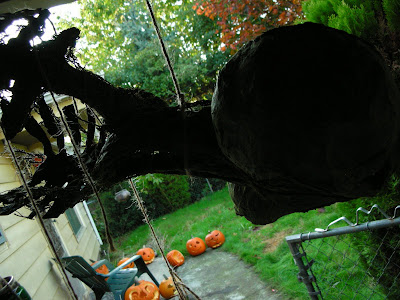 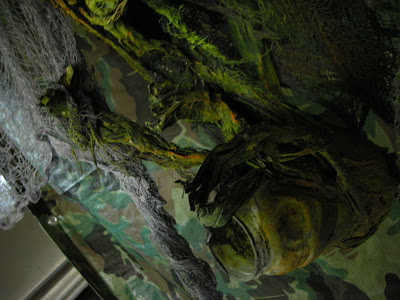 Excerpt from the diary of John Stahl (researcher)


Our group, a fairly jocular assembly of students, researchers, and scientists from the campus of Winchester University in San Locura California, took an interest in the subject because we felt that the usual explanations for the phenomena were insufficient. We also pursued the subject as a lark, most of us being members of the infamous “Rictus Club”, an informal society of like-minded deviants interested in the subversion of the rather banal traditions of campus life. The, so-called, “bog-light” seemed a perfect subject for us, given our predilection for nonsense and snipe hunts. We arranged the expedition, more as a pleasant autumnal camping trip than anything else. 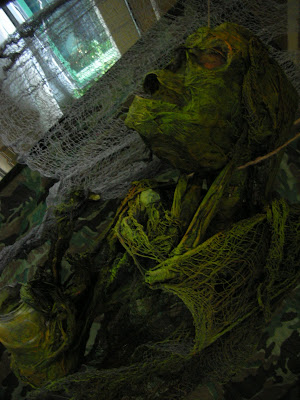 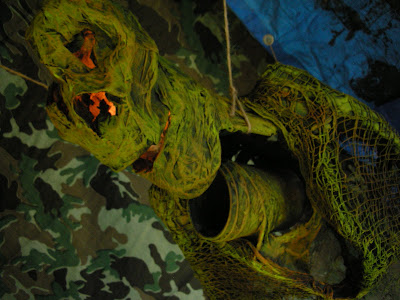 It was the last night of our sojourn into rustic America, and my compatriots had departed already, some by car, others on flights from the local airfield. The cars being full, and I suffering a horror of flying, booked a trip by train for the following morning, which left me a night alone in the small backwater town, with the appropriate of monicker, “Trainsong”.

There was not much to do in Trainsong, and having adopted the habit of taking a long evening constitutional, I set off down one of the winding country roads out of town. It was an agreeably cool and clear autumn evening, and I had gone some way, when I approached a copse of trees, which appeared to bound an abandoned dwelling, near a stretch of bog. 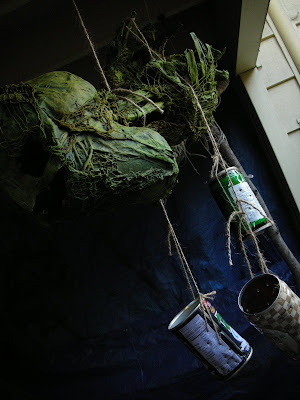 These tin cans were pricked with nail-holes, and each had a candle inside. 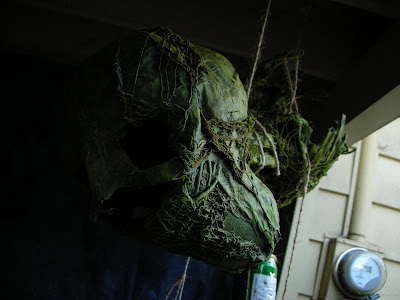 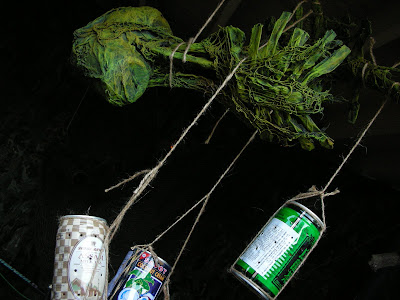 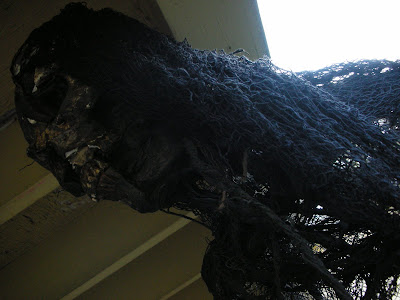 This is the one made from the crushed skull, that kept taking a header into the concrete 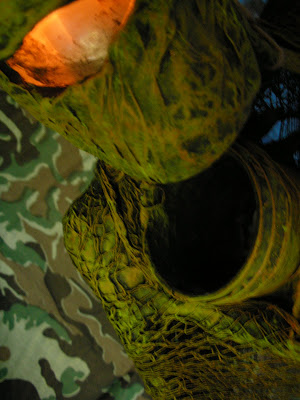 
I came upon the bog-lights. I will admit, that I am no more certain now, than I was before encountering them up-close, as to what exactly they were, except that I can attest that they are not self-igniting swamp gasses.

My first impression was that they were some sort of vegetable growth, perhaps a symbiotic culture of mosses, vines, and luminescent fungus. But then, they appeared to have almost recognizable features, faces or an approximation of a face, grinning or leering out of the darkness. It was as if they had grown to vaguely resemble a human being, via some sort of beneficial evolutionary trait. But why? Many plants have been known to develop lures for certain animal species, in order to spread their pollen, or in the case of carnivorous species, to devour them... 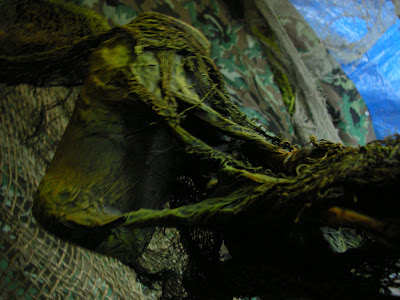 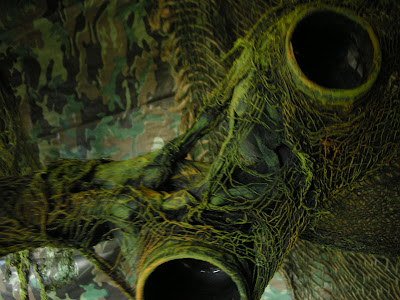 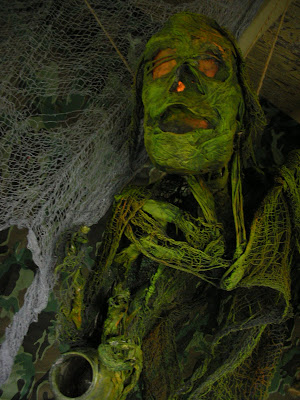 
…which lead inevitably to my next speculation: that they may actually have been composed of dead bodies, lured to that desolate location and then, overgrown, absorbed, composted, by the living plant matter. This seemed to be borne out by the litter of bottles and other rubbish woven into their… bodies. On one or two, I could distinctly call out the features of a degraded human skull, and it was at this point that I decided to flee the scene. A sensation of panic had slowly crept up my spine, and I admit that I fled that place immediately. They seemed to be watching me. 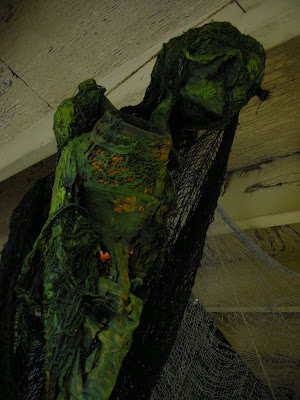 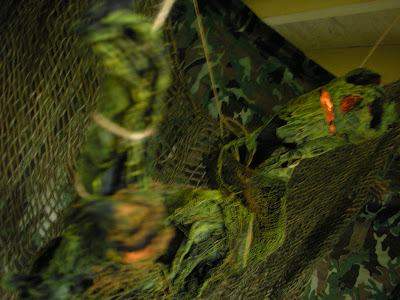 
And it was that revelation that had urged me to flee: their seeming consciousness of my presence, that eerie impression of dumb hunger. A plant has such limited apparatus of sensation, let alone thought, but these… things… seemed almost cognizant! The leering expressions wrought on those mockeries of a human visage. I felt an overpowering sense of malignancy! It’s virtually impossible to broach the subject in scientific circles, but I swear I doubted, almost instinctively, whether these bog-lights were a “natural phenomenon” at all. My director was good enough to take some footage of the haunt, and we're planning on editing it together into a short video of all this in action. Look for it!
Posted by Mantan Calaveras at 12:31 PM 7 comments: