I've been watching videos of yard haunts on youtube this evening. Every so often I find one that's REALLY special, and I add it to my Yard Haunt playlist.

One of the things that I look for in a good haunt video, is a unique soundtrack. Pretty much everybody uses "This is Halloween", "Thriller", or something from Midnight Syndicate, so when a haunter chooses a tune that is really unique it stands out.


This evening I found this video by HamlinHaunt, and the choice of music really complimented the great atmosphere of their haunt. It's a version of the 13th century latin hymn "Dies Irae" (Day of Wrath) a giant funeral mass for the end of the world, with a definite apocalyptic feel to it. I think most people know it as the theme music from The Shining.


There have been a number of excellent versions of the Day of Wrath throughout musical history, here is a version of the original Gregorian chant.


Here we have Amadeus Mozart's version of Dies Ira as part of his famous Requieum. It is a a soaring, yet personal lamentation of premature death.


Now we have Franz Liszt's Dies Irae, "Totentanz" the German term for the French "Danse Macabre" or dance of death.  Bombastic, brutal, like a piano being smashed beneath a hammer. Death leading dancers of stations both mighty and meek, into the grave; be they pope, emperor, king, child, or peasant, all face the same end, and the same uncompromising judgement, or so Liszt seems to say.

Now Verdi's Dies Irae, utterly epic. Whereas Liszt gave us an intimate dance of the dead, and Mozart gave us a soaring personal tragedy, Verdi's version suggests the whole earth being thrust up, overturned, and all of humanity thrown into confusion and turmoil.


Okay, bear with me, I know these are a lot of old dead classical composers, but hark, we now come to my personal favorite of all the versions of Dies Irae, Hector Berlioz' "Dreams of a Witches Sabbath" from his brilliant "Symphonie Fantastique" which is chock-full of amazing Halloween music. Seriously, put this on next time you set down to do some prop building, it will inspire you!

You may recognize many of these pieces from movies that you've seen in the past, and due to their popularity in cinema, there are tons of modern covers of Dies Irae. I'll leave you with this great folk-metal version of Totentanz from German band "Corvus Corax", and sort of take us full circle, heh heh. ☠

Posted by Mantan Calaveras at 2:53 AM 4 comments: 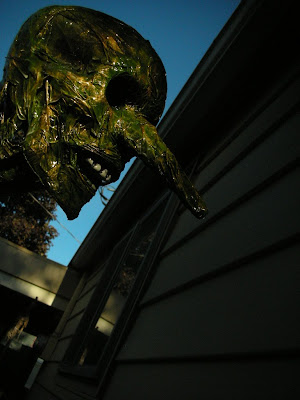 I sat down and painted the witch head that I made last week, then I sealed her up with clear coat and set her out to dry. She's still a little tacky, but I went ahead and took some photos while I still had light.

Honestly, she's kind of creeping me out, so I figure she'll spook the kids come Hallowe'en.

For the paint job, I put on a coat of black paint and then dry brushed on some violet, over which I added highlights in metallic gold. Then I tinted the whole thing with forest green, brought out the highlights with light olive green, and finally accentuated with more gold.

My hope is that the metallic paint will help catch the light, and I tried to give her a light enough paint job that she'll show up in the dark. I somewhat regret tinting the whole thing green, I suspect that doing olive highlights over the violet base would have created an interesting effect.

And she still needs eyes. I am thinking about using some semi-translucent green marbles that I saw at the dollar store, though I visited the Mecca art supply thrift store yesterday, and they had a whole barrel of ping pong balls.

When this witch head is done, I think I'm going to do a Frankenstein. 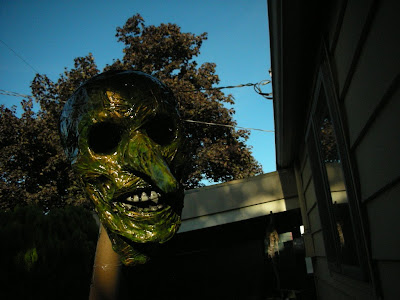 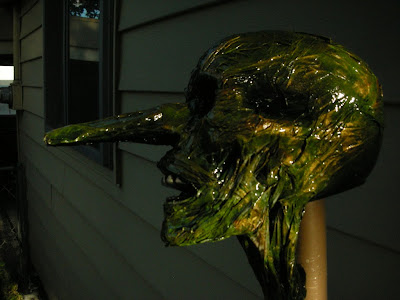 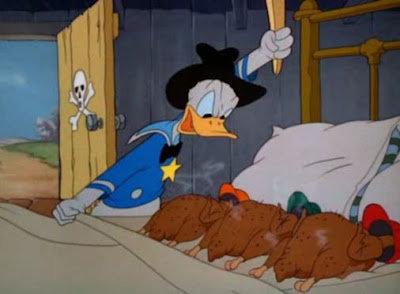 I've been watching classic Disney cartoons while I work, I just put them on mute and try to keep track of the plot from the visuals alone, which gives my brain something work on while I type, ha ha.

Disney is usually considered very wholesome and family oriented, but I have to say that I see a cruel streak running through the subtext of a lot of these, particularly the Donald Duck cartoons for obvious reasons. Even Mickey has a mean streak though, especially the early ones that Walt worked on himself, Mickey has a lot of latent bitterness, which he takes out on others.

The image above comes from "Truant Officer Donald" in which Donald tries to round up his hookey-playing  nephews and get them into school. This is probably the most nightmarish image I've ever come across in a Disney cartoon, taken out of context it tells a dark story, it almost seems psychotic.

Later in the same cartoon, Donald has Huey, Dewey, and Louie tied together by their throats, whipping them along with the end of the rope. Family friendly, hhm? You can check out the toon yourself below:

Which Witch is Which? 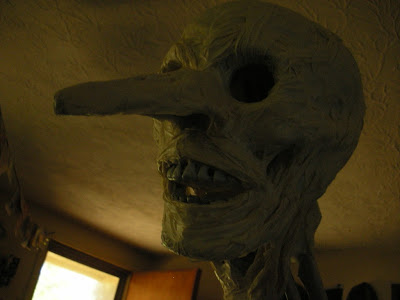 I've been itching to do some Halloween stuff, but between being broke and not being sure if I'd relocate to New Orleans before October, I haven't really done anything yet this year.

But last night I got kind of bored, and decided to start on a witch prop. I've wanted a witch for my haunt for a few years. Witches are cool. This one is admittedly influenced by Pumpkinrot!

My mother gave me a "bag 'o' bones" for Christmas a couple years ago... I'll just let that sink in... anyhow I took the skull out of the bag, nabbed a roll of masking tape, put on a few episodes of Charlie Brooker to put myself into an appropriately misanthropic mood, and set about laying some flesh on dem bones.

I think she's turning out okay. I need to find some way to seal it, as the tape will lose its tackiness eventually, then I just need to paint her up.☠
Posted by Mantan Calaveras at 11:22 AM 5 comments:

So, I don't know why I haven't shared this before.

Some of you may know that I am the Director of Animation on an independent feature length horror film called "Blackbird Pie". Well prior to Blackbird Pie we produced a short film on which to cut our film-making teeth. We had zero budget, and few resources. We drew on the local community for talent, we shot late-nights on the streets of Eugene Oregon, and improvized A-lot.

Zombie Awareness Now was the result.

So, here is un-living proof of what you can achieve with no budget, a consumer DV camera, loads of toilet paper, corn syrup, red food dye, and some good friends.

I must say I highly recommend movie-making, nothing reanimates the childlike joy of youth like being on set. Especially when there are zombies involved.

Yes I do have a small part in this, no I won't tell you which, ha ha!
Posted by Mantan Calaveras at 2:09 PM 2 comments:

Welcome to, the Twilight Zoan 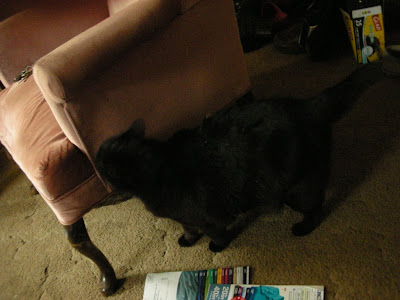 This is Zoan, our newest resident at the house. Zoan is actually a previous acquaintance, he lived with our roommates when we were all still in apartments. When we moved to the house, Zoan went to live with my roomies ex-girlfriend. Well this week the roomie went to help his ex move her stuff our of her ex-fiancees house, and they found that the fiancee had left Zoan all alone in the house with a pile of food and no one to care for him.

So Zoan was scooped up and brought back to our house. Left to his own devices without anyone to care for him, Zoan had overeaten and gotten too fat to clean himself properly, so he got a bath and grooming job. My roommates brushed out the burrs, cut off the matted hair, and put salves on his wounds.

So our house finally has a black cat, which I think was somewhat innevitable.  Zoan is a real buddy too, always wandering under my desk while I'm working, looking for a little attention. I prefer nice cats to the aloof ones, So we're gettin' along. ☠ 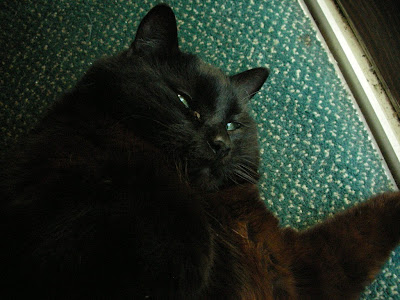