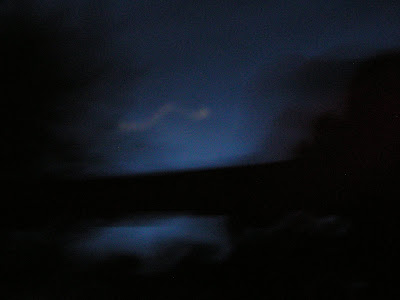 Cool and clear, right on the money. Haunt is in operation. The moon is a crescent and my powers are at their height. It's quiet now, no trick or treaters yet.


Some pics of the evening 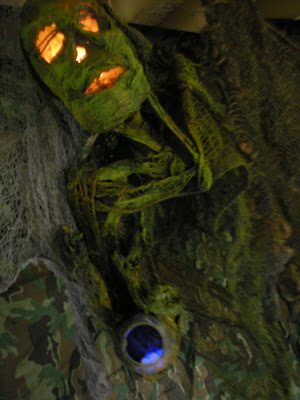 A bog light in action. I'll have to see if I can get some decent shots of these for you. 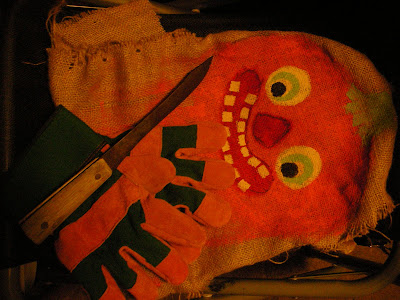 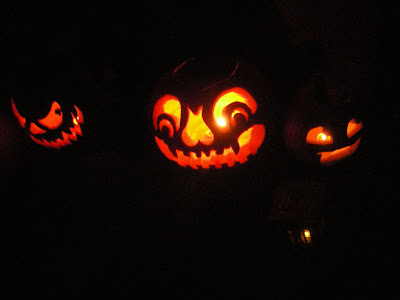 Some of our Jack o' Lanterns this year. The two left-most are mine. 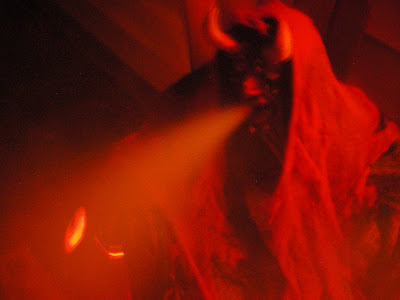 Fogging devil was a gift from my Dad. It reduced a toddler to tears. 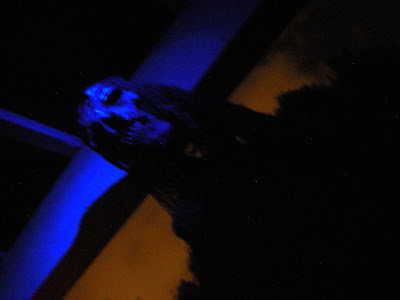 Another bog-light. He seems to have gone out.
Posted by Mantan Calaveras at 7:04 PM 7 comments: 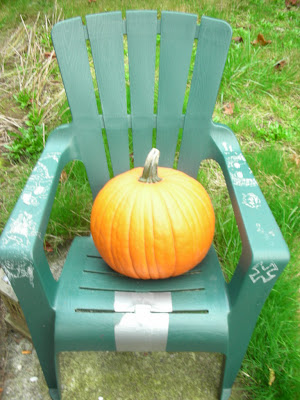 So super happy. This is the least-rushed Halloween I've had in years. Sure, props are still hanging to dry, but the carport is cleaned up beautifully, we've got our pumpkins together, our Halloween candy waiting in the cupboard. We had an excellent Halloween thirsty Thursday.

Now, we're just waiting for the wheel of weatheric fortune to land on "cool and clear".
Posted by Mantan Calaveras at 5:46 PM 2 comments:

ψ What is it Ώ 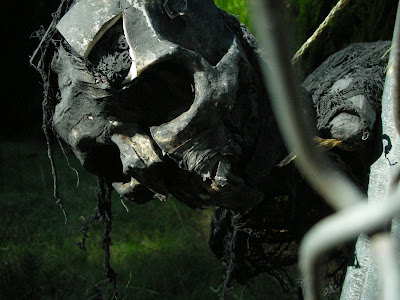 This was made from the shattered remains of that big lots skull. Must be cursed, because it kept taking a header to the pavement last night whilst I was applying creepy cloth. I hung it up in the sun this afternoon, and really liked how this shot came out. So another, this time inadvertent, teaser.
Posted by Mantan Calaveras at 6:44 PM 5 comments: 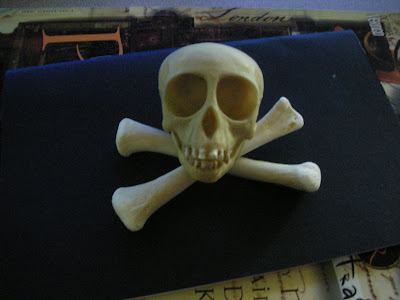 Luckily, we were fortified with Dave's homemade chicken soup, which was bomb, but not quite as good as my own. I've been working on my own recipe. It's pretty simple, thought I'd share.

Pretty simple. Start by chopping your Carrots into quarters, down their length and in half, then add to the stock pot. Peel and halve one of the red onions and add the halves to the pot. Peel and halve the ginger and add it. Inspect the chicken and remove the neck and innards if they are included, then add the chicken to the pot. Add water just to cover, and then the vinegar and bring to a boil. Once the pot is boiling, reduce the heat a little, and let it boil away. Use the mesh strainer to skim off the scum that forms on the surface. When most of the scum is clear, add a little salt and some ground pepper.

It will need an hour or more to boil, every so often test the chicken with the tongs, when the meat starts to fall off the bone on it's own, test the breast, if it feels like it's coming apart give it another 5-7 minutes and then remove from heat.

Use the tongs to pull the chicken from the pot, and place it in a pan or on a cutting board to cool. The chicken is perfectly cooked if the legs come off together as you lift the torso.

Place your colander over the secondary pot, and drain the broth and vegetables into it. Some people like to cool the broth at this point, and then remove the excess fat from the surface. But we are not afraid of fat. The fat is our friend.

Remove the colander and set it's contents, the carrot, ginger, and onion aside. Transfer the broth back to the original stock pot, and add the pasta to soak.

When the chicken has stopped steaming, start picking the carcass. I usually grasp a portion with the tongs, and pick the meat off with my fingers. Be careful, it's way hot. Have a spare pan or bowl handy to toss the bones into. You can use household peroxide to bleach those bones later, if you want to use them for some nefarious purpose (see above picture). As you work, toss the liberated meat into the secondary pot.

Once the carcass is picked clean, chop up the carrots and ginger. Discard the boiled onion, it has a nasty flavor and texture after all that boiling. Instead, slice up the other fresh onion, it will have a nice crisp flavor. Slice your jalapeno in half and remove the seeds. Wash your cilantro and cut off the stems, it usually comes in a little bundle, which makes this easy, then chop up the leaves a little.

Add the chicken meat back to the broth and pasta, and apply high heat. Add the carrots, ginger, onion, jalapeno, and cilantro, and let it all boil for a couple minutes. Taste and add more vinegar, salt, and pepper to taste.

All done, I recommend putting it in a bowl and eating it with rad loaves of sourdough with plenty of butter. Fat is our friend.

Also, all that ginger, chicken broth, and vegetables are excellent for your health. This is a cold slayer. Take a dose of absinthe with it and you won't need cold medicine.

I'm in the process of turning this recipe into thom kha gai, and I may share that recipe too, when I'm happy wiv it.

Oh, one week to Hallowe'en, I gotta get busy, happy hauntings!
Posted by Mantan Calaveras at 2:19 PM 6 comments:

Got up early today to run an errand downtown. Stopped in at Bagel Sphere for breakfast. They are so awesome, more Halloween spirit than anyplace else in town. The whole place was decked out with paper jack-o-lanterns, and they were playing the soundtrack to Nightmare Before Christmas.

Gourd-bless-em, it was just what I needed.
Posted by Mantan Calaveras at 2:59 PM 9 comments: 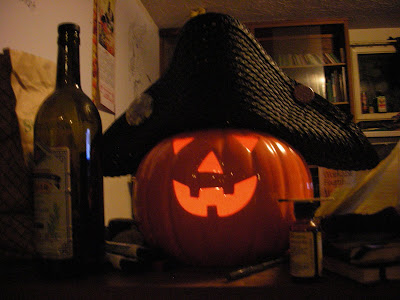 Posted by Mantan Calaveras at 9:06 AM 7 comments: 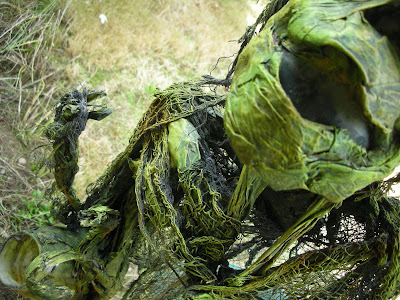 WicKED requested pics of Halloween props for this year. But I am not ready to show them yet, so all you get is this teaser.

Oh man, I love the smell of creepy cloth, especially as it wafts through the leafy October air.
Posted by Mantan Calaveras at 8:26 PM 4 comments:

Masks, and the Faces Beneath Masks 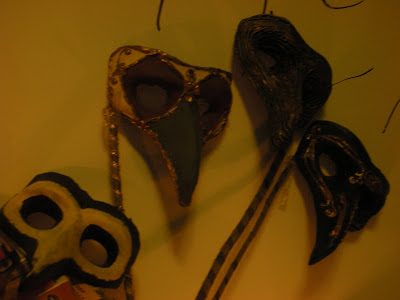 No respectable American small town is without its share of fraternal societies, and Blackbird County is no different.

Blackbird is home to the venerable "Eternal Order of Checks and Balances" an age old secret society which appears to have been in constant struggle with the political powers of Blackbird. 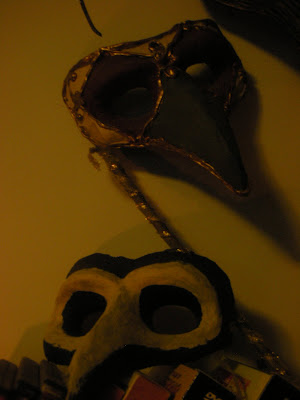 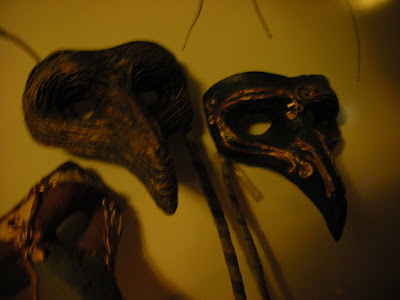 There are five mysterious master cultists seen skulking around the film, so I made these venetian style masks to help obscure their identities. Partially inspired by the iconic Plague Doctor masks of the middle ages, but also part reference to Zanni one of the masked archetypes of the Commedia dell'arte tradition.

After all, politicians and secret societies aside, it's really the clowns that run Blackbird County.

Posted by Mantan Calaveras at 2:26 AM 7 comments: 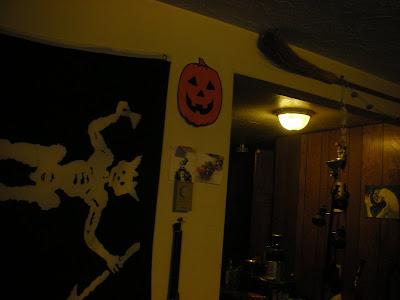 Actually, it's a bit overwhelming. Only one month?

We're taking the weekend off from filming, so for the first time in weeks I'll have Sunday off. I'm thinking a whole day of prop building, break out the decorations, pizza and java.
Posted by Mantan Calaveras at 8:49 PM 5 comments: