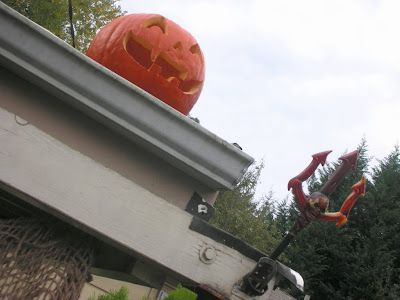 I made a little deal with Halloween. If Saturday and Sunday were crystal clear and sunny, just perfect autumn days, then I would buy a fire pit, and hold a bonfire for Samhain.

See, Eugene and I, well we don't see eye to eye in regards to the weather. We'll get some great fall days, alright, but about the last week of October it starts to rain. It also gets cold, and we'll get maybe 4 or 5 trick or treaters.

This year it was raining hard, solidly most of the week. Woke up Saturday, and it was overcast. I got up, put on some vintage Halloween sounds from ScarStuff and started setting up the haunt. Not much, I didn't have time to make any props, aside from a handful of witch jars. I nailed up a partition of jute netting in the carport, blocking off the second entrance to the house, and I tied open the gate leading to the front door. We have an awkward bookcase that I brought out and setup, with witch jars and one of those talking skulls that doesn't say lame stuff. Doesn't! Not much, I know, but it's what I had.

I hadn't been checking the weather forecast, I thought that would be looking a gift horse in the mouth, remember me and Halloween had a deal. Carly told me there was going to be rain Saturday, Sunday, all weekend, and Monday. I told her that was ridiculous, it wouldn't rain on Halloween.

We carved our pumpkins in the early evening, and then had a party to go to. The party was kind of lame, and crowded we mainly sat on the porch all night, but there were some great costumes. One guy came as The Monarch and Carly yelled "THE MONARCH!" everytime he came through. The best costume I saw was a guy wearing a Luchadore mask, championship belt, and leopard print smoking jacket. Yeah, real cool cat, dig?

I didn't wear my costume, I didn't want the somewhat fragile mask to get damaged. Instead I put on one of the comedia del arte masks for Gary's movie. I think it's Pulcinella motley. I wore a tiny bowler hat we got from the Spirit for Jonathan's role as the Burger Clown. Jenna came in her badass monster shaman costume, of which we have not yet gotten quality pictures. It has a strange paisley face, with fur and ears, and big brassy looking horns, with a big crushed velvet robe and clawed hands. Carly came in her little store bought burlap ghost face costume. It looked really cool.

It started raining while we were there. Hard rain, rain you wouldn't wanna be caught in. Umbrella destroying rain. I stepped in a huge puddle of muddy water on the way out.

We got home about 2 am, the party had started to wear on us near the end, and we were cold and wet. Carly put on "Trick r' Treat", she had wanted to go as Sam for Halloween, but we couldn't get the costume together in time. Next year definitely.

Woke up Halloween morning to more overcast, the sun was breaking through here and there, but it never got completely clear. I finished setting up, Carly put one of our Jack O' Lanterns on the roof. I managed to break two of my witchjars, and my blue floodlight. I was a little frustrated at this point, no proper props, broken lights, and Halloween definitely wasn't holding up it's part of the bargain. As dusk settled in I carved a turnip lantern (technically, I think it was a rutabaga lantern) and called up my Dad to wish him Happy Halloween. He was unhappy about the prospects for trick or treaters around his place, and I commiserated with him about the decline in TOT's. 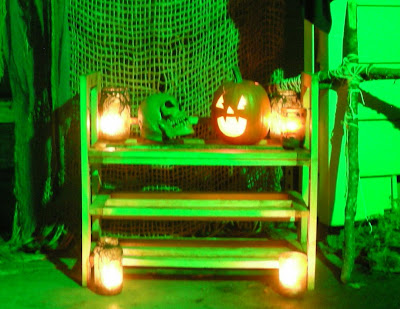 Once it got dark, we started to hear groups out there, making noises in the night. A large group came through the slender hallway between B & Jonathan's bus, and the overgrown hedge fence, through the jute shrouds, into the haunt. When we heard them coming, I'd slip out the second door, and slip on my mask, standing behind a hanging mummy, no one could see me. I'd watch them go through the gate, where Carly did a great job in her ghost costume, holding the candy bowl, the kids couldn't tell if she was a person or a prop. When they came back through the gate, I'd emerge from the jute wall, groaning and shambling into the chartreuse light. I got a couple of groups really well.

One time, after ducking back behind the jute wall, a couple of toddlers in lion costumes followed me in. I squatted down to their level, and looked at them. The kids didn't know what to make of me, too young to know what the scenario meant. I reached out an arm to pat the kids head, and he backed away, saying, "Are you a scary guy?". I dunno, I left it up to them to decide.

In between scaring groups of Trick or Treaters, I was busy in the kitchen, making up dinner. We did mulled wine, and macaroni and cheese, and kielbasa sausage. This was the first time I'd ever made mulled wine, but it turned out good. Even my roommates who don't like wine dug it. I have a couple of friends who are cooks, and my sous-chef friend liked it so much he asked for the recpie. Well hot damn, not bad for a half assed first try. Here's the recipe:

I washed out the pot, and then put in the sugar and water and brought to a boil. I then zested the orange and sliced it, and made a packet containing the cardamom and cloves with a coffee filter and bit of twine. When the water and sugar turned clear, I reduced the heat and added the wine and oranges, followed by the cinnamon sticks and vanilla bean, and finally the packet of cloves and cardamom. I covered it and cooked it on medium low for about 5 minutes.

I just set it on a hot pan holder on the kitchen table with a ladle. It looks really cool in the pot, with the cinnamon sticks and vanilla bean and sech, looks like a serious witches brew.

And what the hell I'll give you the macaroni and cheese and kielbasa recipe too. Why not?

Fill up a large pot with tap water, and salt it. As you bring water to a boil add vegetablt broth or bouillon cube. When the water comes to a boil, add your macaroni and let it cook, stirring occasionally so that it does not stick. When it's al dente, drain it through a collander. Put the pot back onto the stove, and start melting the butter in there, when the pat is half melted, add the macaroni and stir it up. Add the cream cheese and the milk, stirring until the noodles are evenly coated. Add the grated cheese and stir until melted.

The kielbasa is easy to make, but I did it up a different way this year:

I chopped up the onion and laid it in the bottom of a baking pan, then laid the sausages on top. I placed it under the broiler for a few minutes, until the sausages started to burst on top. I poured in the white wine, and then the vegetable broth, and then reduced the oven to 350°. 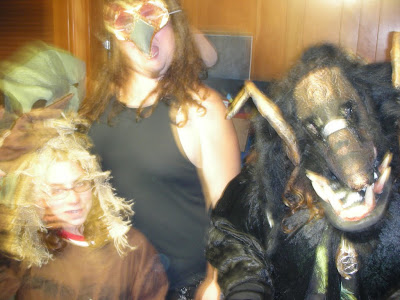 ~Welcome to the Haunted Castle, let me introduce you to my strange friends~
When that was all cooked, Carly decided to go Trick or Treating. She's about my age, but around 5 feet tall and in her ghost costume, labeled for 9-10 year olds, she could pass for a kid. I grabbed my mask and went along with her, posing as an uncle taking his niece out for tricks or treats. This is the first time I've been trick or treating in years, it was kinda cool. We made kind of a figure 8 around the neighborhood, and it was nice to see the neighbors giving out candy. There was a full on haunted house around the corner from us, and we went through. They made us stick our hands in spaghetti, and offered to perform radical surgery on us, and there was a guy on the ground eating the guts out of another guy. Good on 'em, it was great to see a serious haunter in the neighborhood.

There is something about being out there in the dark, and following someone's sound fx tape and colored lights through the trees to their porch. A number of houses did it up right, though we were out kind of late and some people weren't answering their doors anymore. I should have brought my camera along and got shots, but it's terrible in the dark. There was one house with something in their picture window, I thought it was a person watching us, but when I got up close it was a menacing looking clown. Dummies in the window, so old school. At several of the houses kids were giving out the candy, and one of them recognized me, he thanked me for scaring him earlier. That was a treat.

It was warm, and dry, and we walked through the night getting candy, it's the first time in a long time that it really felt like Halloween. I think that sometimes you just have to get out into the night to feel it. My mask lost a tooth somewhere along the way. Always remember, that nothing is ever borne into this world that is not violated before leaving it. 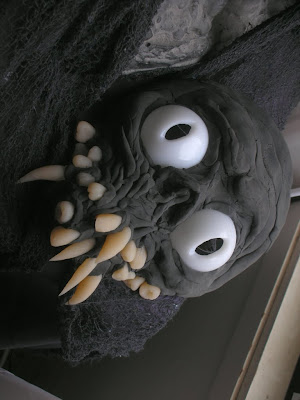 We came home, and Carly spread her haul out on the floor, and everyone drank wine, and enjoyed themselves. I made friend Uri a glass of Absinthe, but didn't have one myself.

Shortly after we got home, our last two trick or treaters came to the door, and took our last full sized 100 grand and Reese's Peanut Butter Cup bars. We actually got exactly enough Trick or Treaters to take all of our full sized bars this year. That's what it's all about, Hallelujah.

The morning after I stopped to pick up donuts for my co-workers on the way in to work. Dessicated leaves whirled through the streets to Le Danse Macabre. Yeah, it was a damn good Halloween. 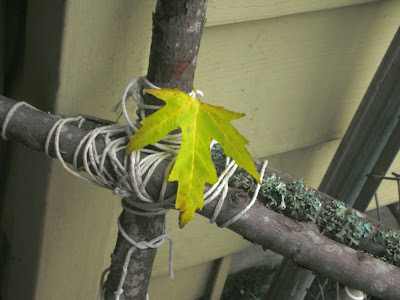 Posted by Mantan Calaveras at 11:04 AM 2 comments: